One of the main problems that all GMs have is quickly setting a scene. Just creating common knowledge among the players of what is happening, without boring them with detail, is a hard problem. I have seen and used many methods of setting a scene, from drawing on an erasable battlemat, to using various kinds of dungeon tiles (including Lego builds), to verbally describing the room. The method of putting Lego wall segments and scenery bits on a gridded tablecloth is by far the fastest, easiest, and most fun method. Everything else just feels wrong now. 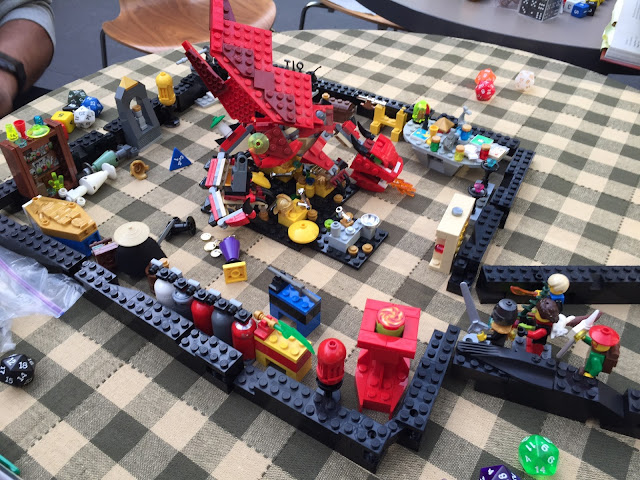 In this post, I use pictures from games I have run to illustrate various things I have learned about the use of Lego as terrain and play aids, discussing my experiences of what has worked well and what has not. The Game Pictures post is four years old, and since then I have run a lot more games, using a lot more builds and techniques. For almost all of them, I had to take all of my supplies somewhere in a backpack, meaning I was running the game with what I could fit in a plastic shoebox.
For a while, I experimented with using a hex-grid tablecloth instead of the square grid one. I found that Lego walls and small builds work just fine on a hex grid. It worked especially well for outdoor environments; I could quickly create a vast scene with lots of room to roam around and explore, in this case an overgrown temple overrun with bugs: 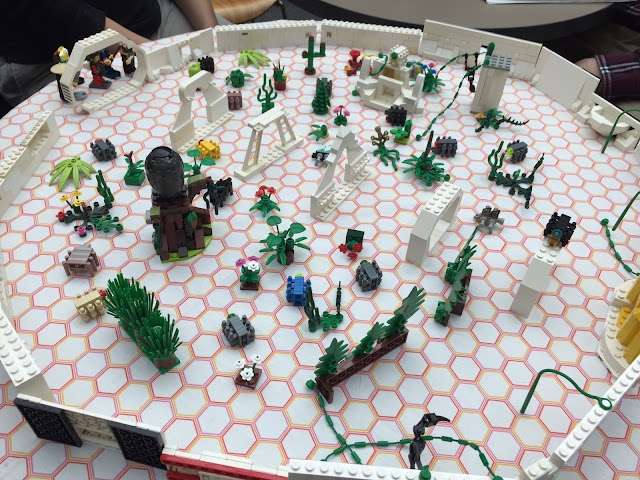 Experienced Lego builders, or Ninjago fans, might have recognized the terrain piece from The Vermillion Attack in the picture above. It has a play feature where you twist a Technic piece and the egg pops open and snakes jump out. I added a plate so that it could make spiders jump out instead. I can confirm that it is loads of fun to spring that on the players in-game. 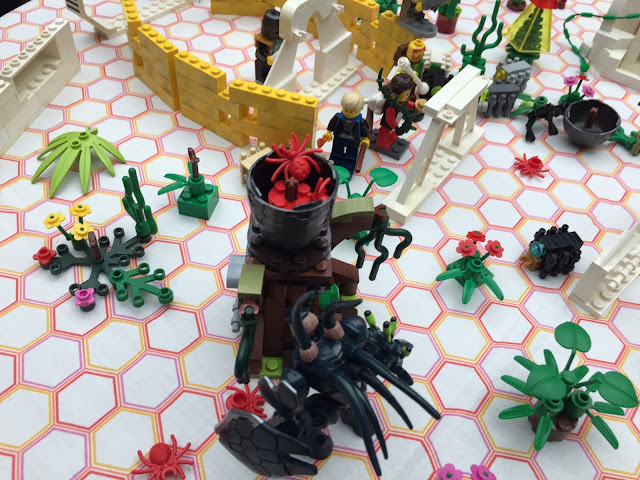 The yellow wall in the picture above is a Wall of Stone, which the party wizard cast to control the battlefield and prevent the party from getting surrounded. You can see that it is just 1x4 and 1x6 yellow bricks stacked up, representing two 10-foot segments of the wall. Making Lego builds to represent spells like this that place anything on the environment is a very handy play aid.

Another way to make a large dungeon that you can fit in your backpack is to use microscale. Have each stud represent a 5-foot square and use Heroica figures for the PCs and enemies. You can build the dungeon on baseplates, and pull out and connect the sections as the PCs explore: 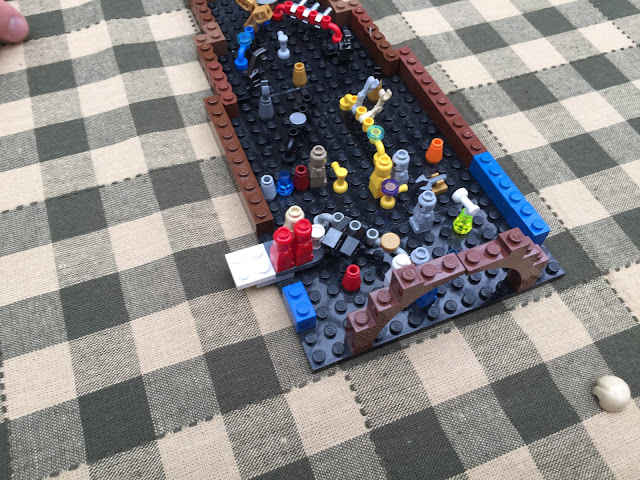 Microscale is also appropriate for naval combat. Make microscale ships, and move them around with people on board. One Spelljammer game featured both of these uses of microscale. The PCs had to stealthily approach a Mind Flayer Nautiloid, using space terrain as cover, and breach it with their ramming craft. The setup uses my then-standard technique for setting the height of floating objects or flying or swimming characters: blue bricks and plates, placed sideways, with every three studs marked. This normally marks 5 feet of height, but in microscale it marks 15. However, they were very prone to falling over, and in future games I will be using sideways tires as the base for flying objects and marking vertical distance and all associated diagonals with a ruler. 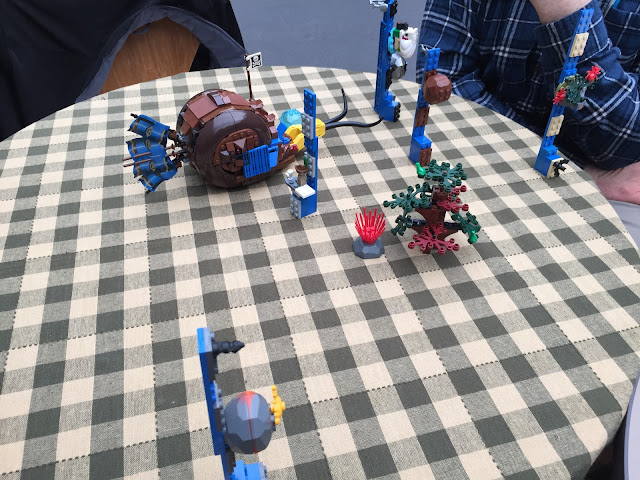 After breaching, they fought their way to the core to defeat the mother brain. ( In my game, the inside of the ship was a single level that tapered to a point, using gravity magic to curl it up into the nautiloid shape.) That is the microscale dungeon above.

Then, after they took over the ship, in the next game I switched back to normal scale, representing the ship's bridge with a few walls and magitech gizmos. As they were piloting it back to salvage, they had to fight off a swarm of space jellyfish. The jellyfish are a simple build of sticking tentacles and tubes under a cockpit piece that otherwise has no use in a fantasy world: 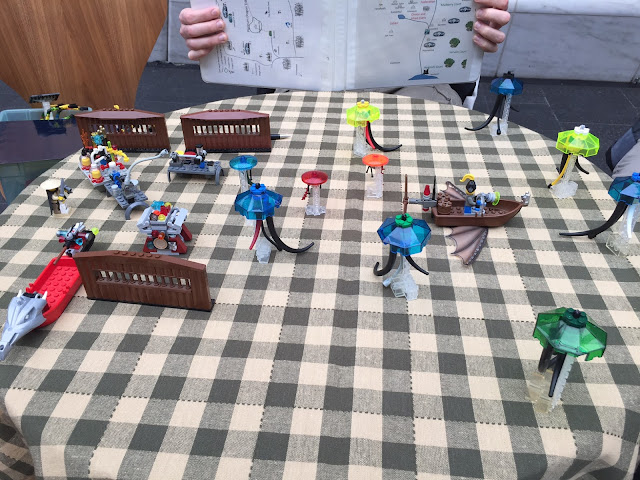 In a different storyline, back on the ground, they fought Yuan-ti, made with a large humanoid torso on a radar dish base that represents the snake coils. I was experimenting with a variable-height terrain system, using technic pegs and long beams, but it was more trouble than it was worth. Next time I'll just put the baseplate on four big pillars of stacked 2x4 bricks. 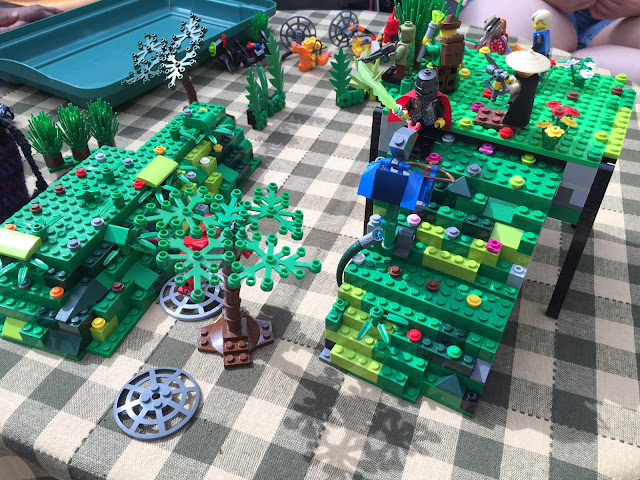 If you look closely at the baseplates above, you can see my favorite method of making a 1-inch grid on a Lego baseplate: put a 1x1 plate, or some other thing, every three pegs. in each direction. Minifigs are placed in the four pegs in the center of the square formed in this way. This creates a workable grid in a way that looks natural, and matches the little white crosses that mark out grids on some dungeon tiles.

Here's a mad wizards's lab. Note the gold pylons, made with a yellow ski and propeller cowling. These kinds of pieces inevitably show up bulk brick lots, and tend to accumulate, cluttering up my brick filing system until I sit down with them and try to figure out how to make them into useful game terrain. The system of placing things on a non-Lego surface helps a lot, because it lets you easily ignore traditional geometry and place things sideways. It would have been a much more challenging build to put that pylon on a Lego baseplate, but instead I can quickly throw it together and toss it in one of my terrain bins. 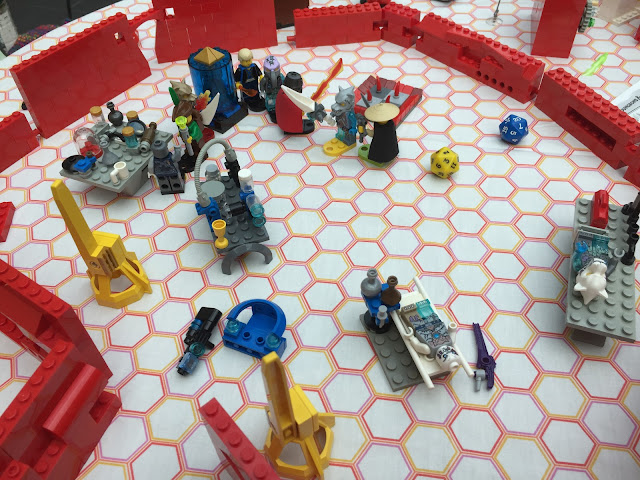 Speaking of using up 'worthless' parts, I use printed space parts to represent a modron hive. The party had to destroy one when the modrons tried to start a colony and consume the ecosystem. The red slaad in the top-middle under the orrery is a party ally; recruiting a creature of chaos to fight creatures of law can be a good strategy. To the left you can see parts of a wall of fire that the wizard cast to block off a hive opening, and near the bottom is a summoned scorpion from a figurine of wondrous power: 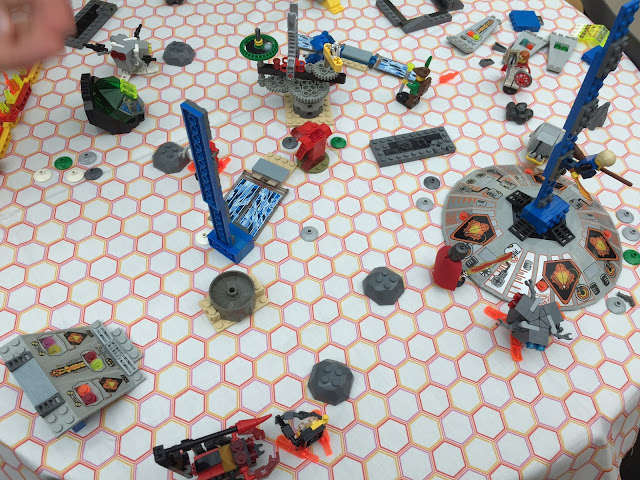 The black tiles surrounded by gray plates represent pits or fissures in the ground. I use those little things a lot. 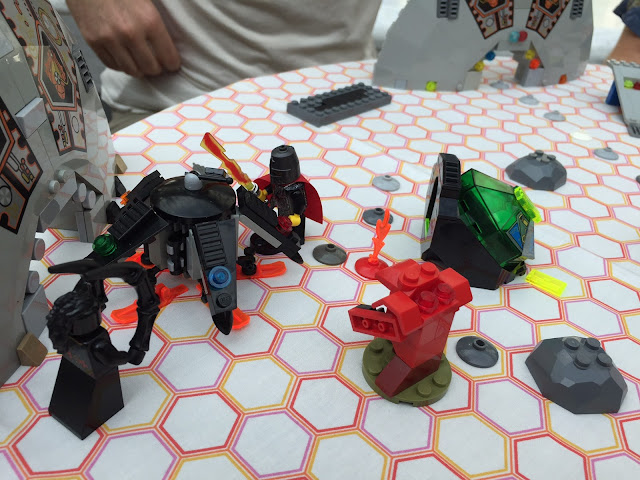 The gray disks are puddles of gray goo. To make the modrons more powerful and scary, I made them dissolve into puddles of living corrosive goo when they die, which have to be destroyed with magic or energy attacks. I have gotten a surprising amount of use out of piles of loose radar disks. They can mark status effects, environmental conditions, and other markers of interest on the map.
Here, assemblages of colored cones and dishes and small round plates are used for a puzzle room. They had different effects based on the color of one part, and the method of removing or dispelling them was based on the color of another part. The players had to try different things, watch what happened to their characters, and then figure out the rules of how to guard against and remove the magical effects. 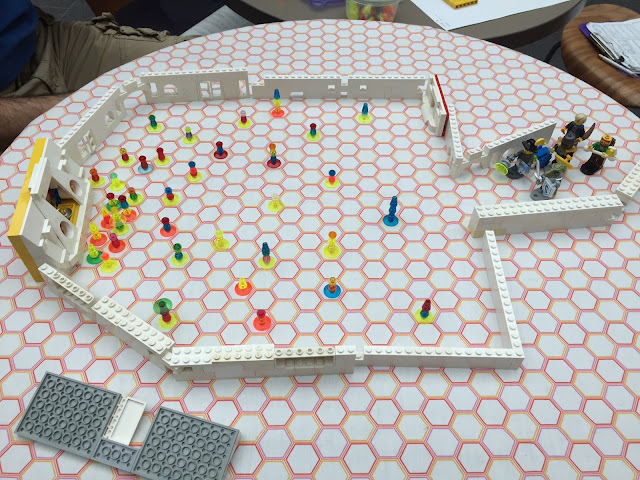 Another good use of space parts is sideways engines to represent summoning rings or teleportation circles. 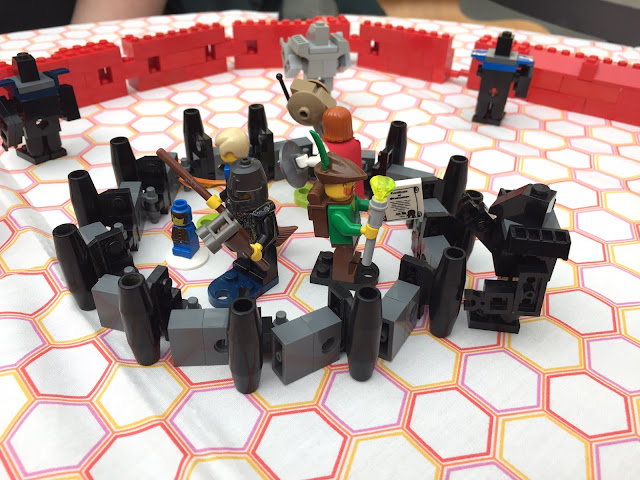 I ended up using cockpit-based elementals and oozes quite often. The 'junk pieces' ended up being more valuable for running the game than a lot of monsters or locations that you might be tempted to buy just for the game. The lack of perfection and detail gives them more flexibility. In this case, I added green bricks to the air elementals because they had been enhanced to include poison gas: 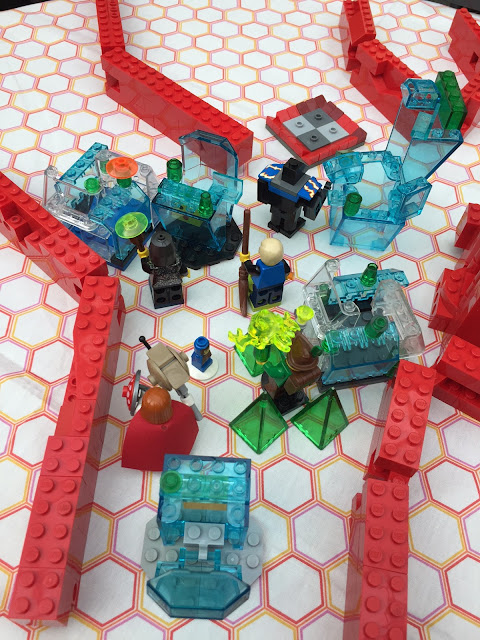 And of course, putting character minis inside a gelatinous cube never gets old. Here, they were cruising along in their little assault craft when they flew too close to a cube that was lurking along the travel path. Rescuing your teammates from one of those things is significantly harder in zero gravity. But by then, they had learned never to go into wildspace without a large supply of harpoons and grappling hooks. I got a lot of use out of those Lego rope pieces. 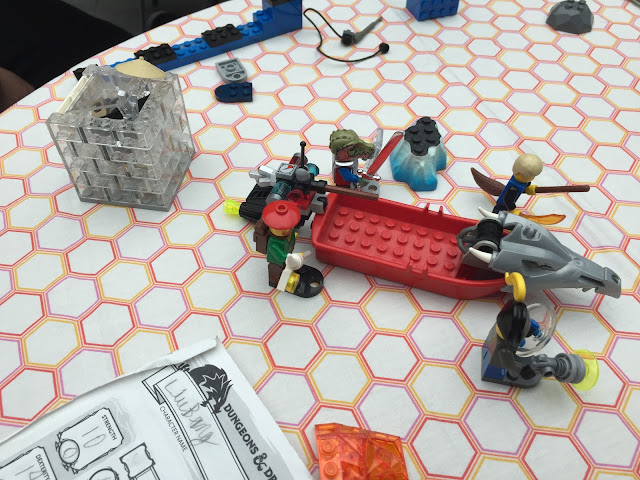 I have also gotten a lot of use out of the boulder pieces: earth, metal, ice and lava. They can represent elemental nodes and similar features, especially with the ability to put things inside them. If they roll high on some kind of search or investigation check, I can open the piece and hand them an interesting object. But they get used often enough that the players don't assume that there is always something inside. They are easy to throw in the bin and add variety and interest to encounters. 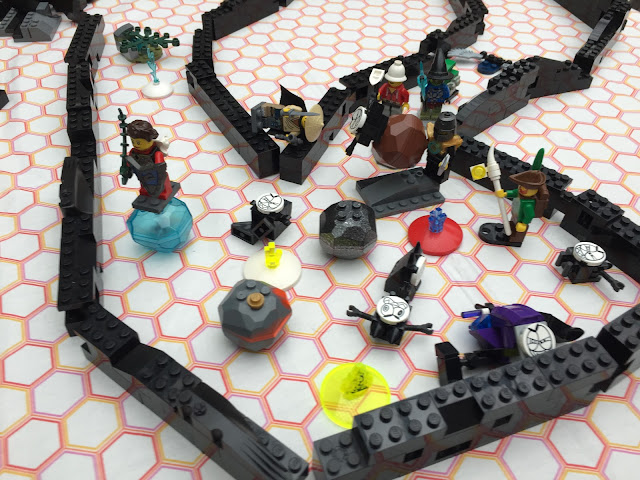 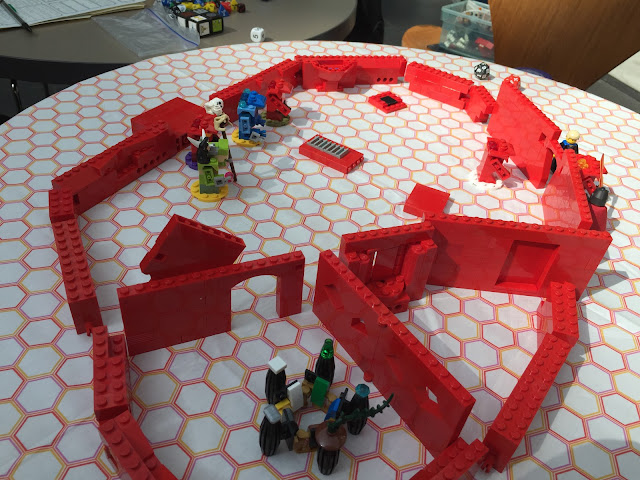 Overall, my experience has taught me to focus even more on simplicity, flexibility, and reusability. The builds that I keep replying on time and time again are often just one step up from using dice to mark terrain features on the map. Often they are just a few pieces stuck together, something that you can throw together in a minute with a novice level of Lego building skill. But that is all it takes to make the game so much better.