Like most GMs who run a regular campaign, I have a game to run every week, and, depending on my schedule, I have anywhere from a few hours to a few minutes to prepare everything for it. Things get even more challenging because I run a campaign where the players have a lot of choice about what they will do next, and they often take the campaign in unexpected directions, like assembling a coalition of local tribes to attack a hobgoblin stronghold. 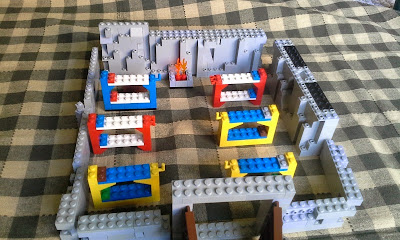 The key to managing this is to make small, flexible Lego terrain units, much like dungeon tiles. I have amassed a library of walls, doors, buildings, terrain features, and dungeon dressing that can be quickly assembled into whatever the adventure of the week calls for. 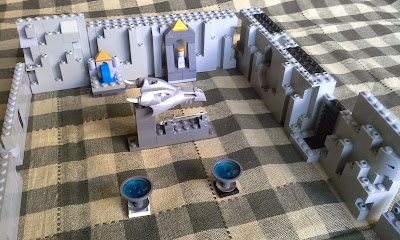 It is possible to use Lego walls along with printed battlemaps or dungeon tiles. But I typically use a green and tan checkered tablecloth with 1-inch squares. It works as a terrain grid for almost any situation. Most of the play area is not covered with bricks, it is just the tablecloth grid. This lets the battle roam over a large area without requiring a massive Lego build, or the placement of dungeon tiles. 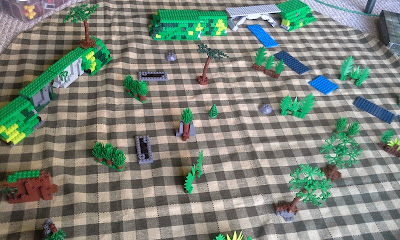 The important thing to remember is that you do not have to portray everything. You only need enough bricks to convey the idea of things, the relevant information. Think in terms of facades and cutaway views. Take inspiration from the small cheap Lego sets rather than the big expensive ones. 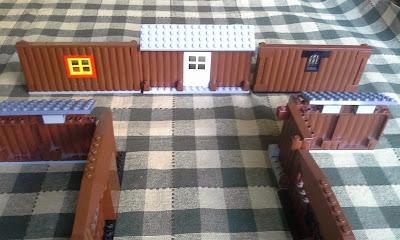 It helps to define a visual language, and use it consistently. For example, Lego pieces with smooth tops can represent places where it is difficult or impossible to stand, while terrain features with lego studs represent places that characters can move onto. In my campaign, yellow bricks usually represent some terrain feature that is magical, like an illusion or a newly conjured wall of stone.

The most basic Lego construction is a dungeon wall: 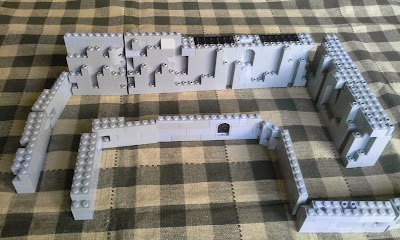 When I started, I made them six bricks high, for realism, but that obstructed the view of the players. Walls three bricks high work just as well for defining the environment, they allow you to make twice as many walls, and they allow easier access to the play area. I am still stuck with a lot of six-brick-high walls made from the large premolded rock wall pieces, but I can use them for the background and keep the smaller ones in the foreground.

It is possible to use walls that are simply a lot of bricks connected together, but I prefer to make mine with a joint for extra flexibility and stability: 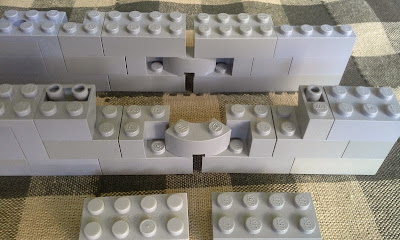 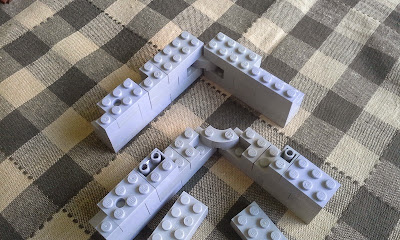 I also make them so that one side is smooth and the other is rough and textured. The smooth side represents artificial walls or construction, and the rough side represents natural caverns or rough-hewn tunnels.

There is also another option for dungeon walls. You can take large plates, add smooth-topped and slope bricks to them, and put them on their side. This gives you more walls, and lets you use up pieces that might otherwise not help you much: