This is a Game Master post, not a Lego post. But the overall approach described here works well with Lego Dice. The pictures are interesting game moments that happened partly as a result of using this system.

There are four problems that GMs often run into, and they can all be fixed by a shift in how you think about die rolls that represent success or failure on a task. 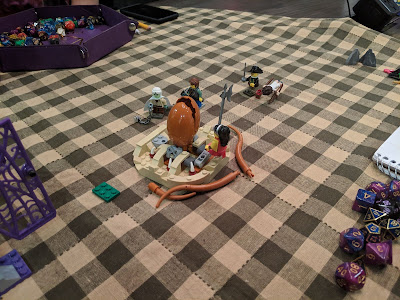 One problem is that of endless rerolls. If someone fails in a task, and there is no meaningful consequence of failure, players ask to just try again and again until they get it right. This kills any kind of tension, and makes the core mechanic of the game almost irrelevant. But outside of combat and stealth situations, it is often difficult to come up with reasons why a failed attempt caused problems or why it is impossible to reroll.

(In the ancient days of the D&D, when it was all dungeon delving, this problem was solved by wandering monsters. Everything you did took time to attempt, and at regular time intervals, the DM would roll for random monsters that game very little treasure or experience, so it was pure downside. This made every action costly and so forced players to budget them.)

The second problem is when one player fails due to a bad die roll, and then a different player, with a worse stat, succeeds because of a good roll. It is sometimes possible to come up with a good story-based reason for this, and say that some quirk of the lower-skilled PC's background allowed them to accomplish it, but if it happens too often it can kill immersion and believability. I've seen a lot of houserules or ad-hoc fixes to try to stop this from happening, but they usually add unwanted complexity to the game.

The third problem is that differences in character skills don't seem important or meaningful. For example in D&D 5e, at level 1, the highest skill modifier is usually +5, while totally untrained characters usually have a +0 or +1, meaning that the skill only matters about 1/4th of the time. If everyone in the party gets the chance to roll independently to try something, than more often than not the person who succeeds will be an untrained person.

The fourth problem is that players feel bad when it is implied that their character screwed up. Story-focused groups can roll with it, especially in a lighthearted kind of game where the protagonists are not doing anything important, but it starts to feel wrong for competent heroic characters to be described as blundering around doing dumb things or failing at what should be straightforward tasks. 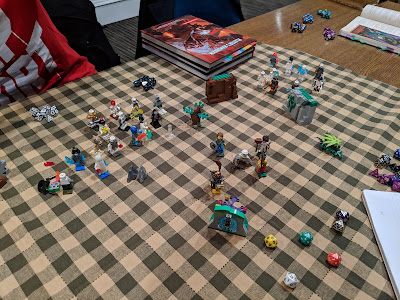 The way to fix all four of these problems is to think of the die roll as representing a fact about the environment, rather than a fact about individual performance. Rolling the die reveals information about the world, and once revealed, that information remains constant. A low roll does not mean that you messed up, it means that the situation is unfavorable or the problem is really hard. If anyone retries the same task, then they use that original die roll, unless something happens to change the situation.

For example, using a d20-based rule system, suppose that the DC to kick down doors in a particular place is 15. If you roll to kick in a door, and roll a 12, then you will succeed if your bonus is +3 or better. If you failed, and nothing happens to the door to change it, then any future attempt to kick in that door will use the roll of 12. So anyone with a bonus of +3 or better will be able to kick it down, and anyone with a bonus of +2 or less will not.

In this example, given the skill bonuses of a low-level party, a quarter of the doors will be so flimsy that any adventurer could kick them down, a quarter will be doors that the fighter can kick down but the wizard cannot, and half of the doors will be too solid for anyone to ever kick down (and optionally, 5% of them aren't really doors at all, but solid walls just pretending).

This approach requires both GM and player flexibility. If one approach, tried by the person with the highest skill, does not work, then it will never work, and they have to come up with a new idea. Don't use it with maps or modules that assume a particular path through, unless you are comfortable winging it.

This approach may seem like a minor change, but once you work through all its implications, it is a significant shift in worldview. You have to throw out the illusion that the GM has everything planned and mapped out ahead of time, and lean into the fact that you are cooperatively creating the setting and the story based on player choices and die rolls. Make sure your players know this, it might take a bit of retraining from the way they are accustomed to thinking about things.

The main way to implement this, after a comitment to flexibility and open-ended exploration and problem-solving, is a change in storytelling from 'you screwed up' to 'you got unlucky'. Your instinct when reacting to bad rolls should be to always think of a story about why the world is set up so that the character failed, despite being a competent and experienced person.

If you have problems thinking of things, then roll on a table (there are lots of interesting and underused ones in the 5e DMG), or use dice or cards with interesting symbols on them as guidance/inspiration.

If you have a group that uses the 'Plot Point' rules (5e DMG pg. 269), or that you would trust to do so, then you can have players introduce a plot twist when they roll a natural 20 or a natural 1. Do this instead of using a pool of plot points, because such rolls will happen often enough and you don't want or need to add any more bookkeeping. 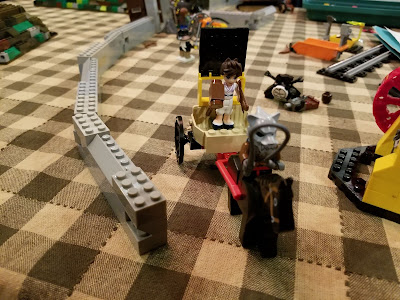 Player: Ok, we have our quest and we need to buy provisions before we head out.

GM: All of the stores are closed. (thinks for a couple seconds) Apparently it is some kind of religious holiday. You can either wait around and try tomorrow, or do without.

Player: Oh come on! Are you really requiring a DC 10 just to get in a store? We can't even shop a quarter of the time, even with our silver-tongued bard? A normal person just fails to shop half the time?

GM: That check is for outsiders. Locals just know when and where to go. Every religion has a different concept of 'weekend', not to mention all the random holy days scattered through the year. And yes, even if stores are open, there's lots of reasons a shopkeeper might not feel like letting a pack of armed foreigners inside.

Player 2: Ok, we really need climbing gear and we can't wait. How do we feel about doing the thing where we break in and take stuff and leave plenty of money for the owner?

Player 3: On a holy day? I think they'd be extra pissed. I'd rather try to bribe the shop owner first. Are they in their houses or all in the church?

GM: Which would you prefer?

Player 3: I think it's a lot easier to convince them to break the rules for money if we get them alone.

GM: Yeah, every decent upstanding community member, aside from the guard you talked to earlier, is going to be in church singing hymns for hours. It's like those colonial Puritan villages with their six-hour Sunday services. (scribbles notes)

Player 1: Wait, what would have happened if that result was a 10? How would having someone with more knowledge affect that fact?

GM: You would have known if and when they were going to take a quick break to go to their outhouse.

Player 2: Well, at least we can try talking to that guard again.

GM: What would you be trying to get out of him?

Player 2: Either convince him that rescuing the child is worth grabbing the shopkeeper out of church, or get the location of some other place to buy provisions.

GM: It was your idea, so you roll for it, but use the bard's +5 modifier for a Persuasion check.

GM: Plot twist in your favor. What do you want it to be?

Player 2: I want a gnome village between us and the place we need to be. A place where I can feel at home for a change.

GM: Sure, that works. (marks on map) You can think of its name and details while we do the wilderness encounters, and describe it to the party when you arrive. You'll have to spend a day trekking through the woods without any new provisions, but you can get good climbing gear and supplies there. The guard tells you how to find it and says, "Hey, as long as you are going there, can you deliver the mail for us?"