Because I was impressed by an earlier Enlighten purchase, and because their War of Glory series is perfect for traditional-fantasy RPGs, I ordered two more sets, one of which was the Blacksmith Shop: 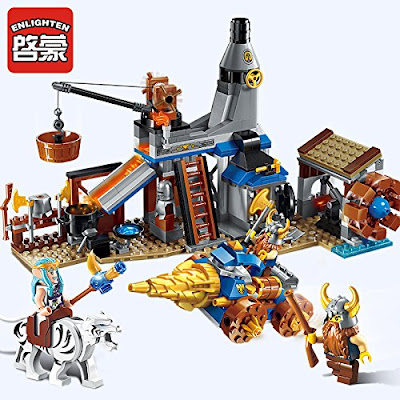 Both sets came in a bubble-wrapped package. 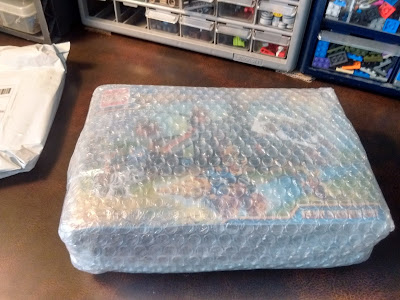 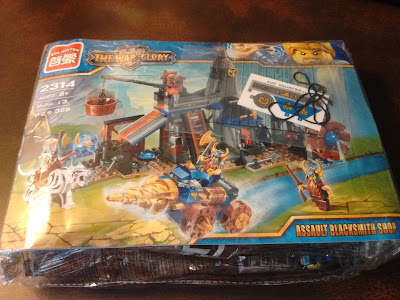 As with Lego sets and the crocodile, the set comes in numbered sequential bags: 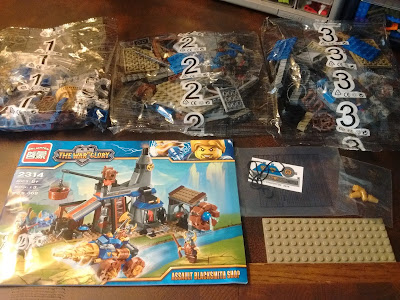 The first bag has all the minifigs, and the pieces for the rolling driller cart. The minifig hands come separate; you have to put them in the arms. There was a spare of each kind; I got three flesh-colored ones and five yellow ones. This turned out to be necessary, as one of the dwarf hands would not hold accessories. 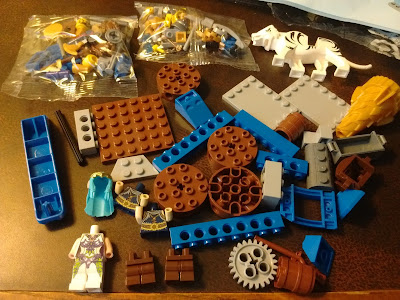 One of the main things that interested me about this set was getting two dwarves with short moving legs. As far as I can tell, these short legs are unique to War of Glory minis. 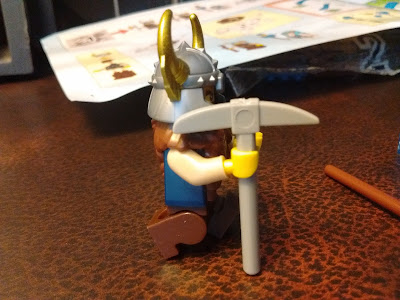 The legs, with real Lego legs on the left, and the two dwarves and elf in this set on the right: 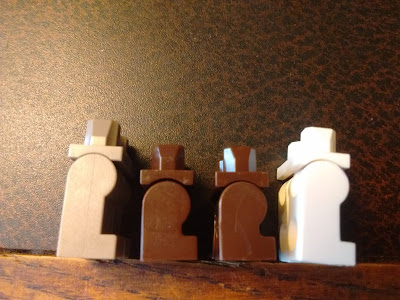 The gap between the legs and hip is smaller than it was in the minifigs in the crocodile set. The two dwarf legs in this set are also different, which suggests that the gap is due to some kind of variability and will be different from figure to figure. As before, the gap creates instability, and makes the figures feel less robust than Lego minis. I am more careful when using them, because I do not want to break them.

The dwarf beards did not fit right when I put them on the torso and later added the head. But when I pressed the head into the beard first, it fit snugly, with the printed mustache lining up with the molded beard, and then I could add that assembly to the torso. The beard is difficult to remove from the head; it might become necessary to trim the inside of the beard slightly to fix this.

The gold-horned helmets are painted, very precisely. I had been hoping for something like the viking helmets with attachment holes and separate horn pieces, but these are still very nice. As far as I can tell, they are an original mold. The quality is very good. They come off the head a bit too easily, but I prefer that to the typical off-brand helmets, which stick too tightly on the head.

The white tiger is very nice. The tail, neck, and jaw all move. 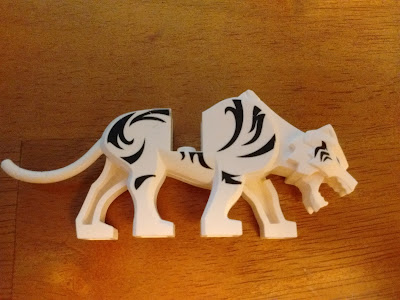 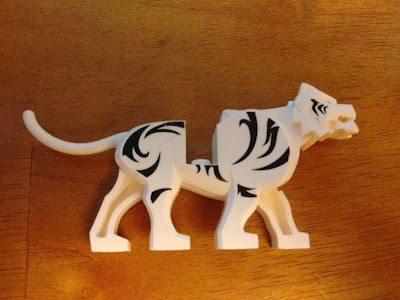 The quality is pretty good, but not as good as Lego. The two halves were not fully joined; I had to press them together. It is a bit difficult to place the tiger on a studded baseplate. It is also a bit difficult to place a minifig in the saddle, especially with the wobbly minifig hips making me not want to press them down hard. Also, the saddle, which is a standard Lego horse saddle piece, is a bit too tall for this figure.

Similarly, the other bricks in this set are almost, but not quite, Lego-quality. The only pieces with mold flashing that needed trimming were the control sticks, which would not move fully in their socket until I trimmed off the excess plastic.

There was one exception. The gold cones in the numbered bag would not form a solid connection with the technic axle, which meant that the big gold drill would not stay on. However, the set came with an extra little bag with gold cones that did fit snugly. The company must have realized the problem, and added the better cones to make it work. 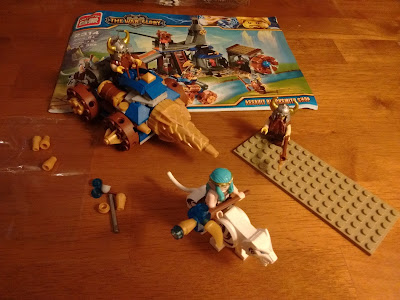 Aside from that, there were no surprises or parts that did not fit.

Bags 2 and 3 had the blacksmith shop build. The quality and ease of build were almost like a Lego set. The hood over the furnace collapsed once as I was building it, because the fit was not quite good enough to hold when I pressed down too hard. And the round black piece often comes off the furnace door when I open it, because its one-pin connection is not snug enough.

There was also a pleasant surprise: an extra gray wall piece in bag 2.

After I built the shop, I modified it to be more modular and portable, replaced the anachronistic molten-steel channel with a mill race for an overshot water wheel, and used leftover pieces to make a little dungeon room: 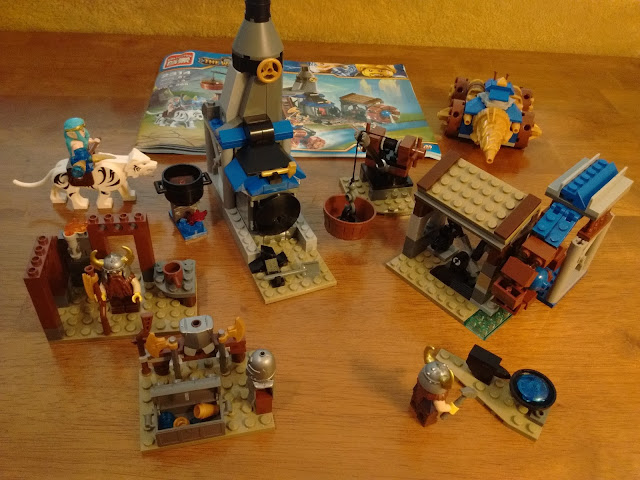 This set is fewer bricks than the crocodile, but it is a better value for running a fantasy RPG. The two flexible dwarf legs are going to see a lot of use. The elf and riding tiger are also perfect for a druid or ranger PC, and the blacksmith shop is an entire adventure site with good interaction, play features, and equipable loot. Even with the lower piece quality, it is a great value for $20 [2018 edit: The price has gone up to $26].