Despite this blog's title, I am not a Lego purist. I will gladly get Halo, Assassin's Creed, or Monster High Mega Bloks when they show up in a clearance rack; the figures make nice enemies and the blocks are just fine for building walls and structures, even if the quality is not good enough for brick-built monsters.

I have not and never will buy the clone sets that are just cheap copies of Lego sets. I will not support intellectual property theft. However, the 'Enlighten Bricks' company is not just a clone brand. They have their own set designs and their own minifigures, many of which are perfect for a fantasy RPG: 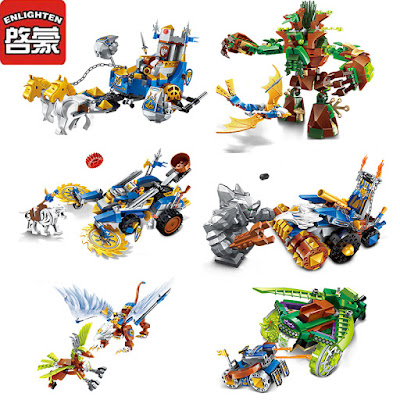 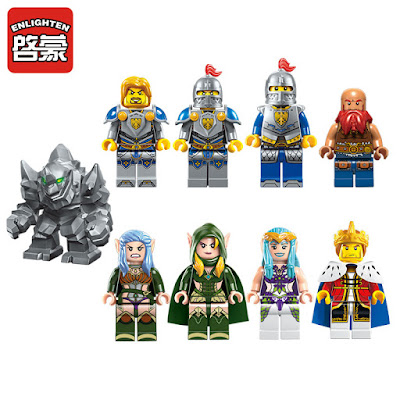 Most of the Enlighten Bricks sets are only available from ebay or Chinese websites, and people who buy them report that they take weeks to arrive and about a third of them never show up. However, Enlighten also has an Amazon store, with a few of their sets fulfilled by Amazon. Most of these cost significantly more than they do on ebay, but there was one, Fury Crocodile, that was cheaper and looked good, so I decided to try it out. 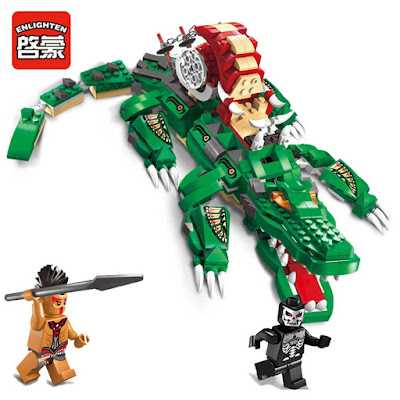 The set arrived on schedule, like most fulfilled-by-Amazon deliveries. As the site stated, it came without a box in a bubble-wrap envelope. Inside the envelope was the set and instruction booklet, wrapped securely in another layer of bubble wrap. The set comes in four numbered bags, designed to be opened and built sequentially, like modern Lego sets. 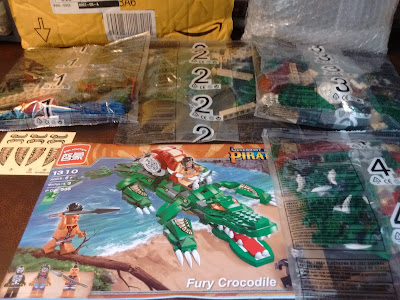 Also like Lego sets, smaller pieces come in little bags inside the bigger numbered one. Here is bag #1: 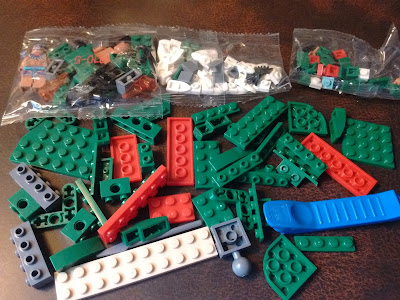 The set came with Enlighten's own design of brick separator. I sometimes used it in construction to help press little bricks into place when they did not fit easily. 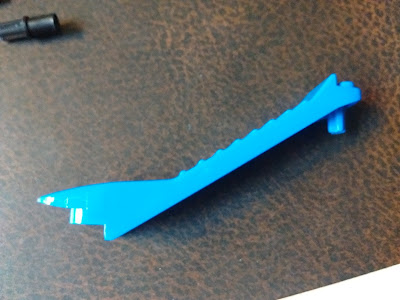 
The minifigs come with the hands separate, you have to put them in the arms in yourself. On one of them, an arm popped out when I first tried to push in the hand. I was able to reattach it easily. The arms seem to fit fine for most uses, although they would probably pop out if a child played with them. I actually like this fit better than the hard-to-remove Lego arms; it makes it easier to swap them out for character customization. 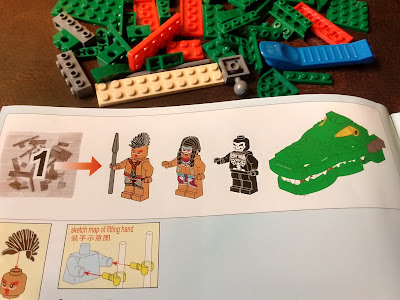 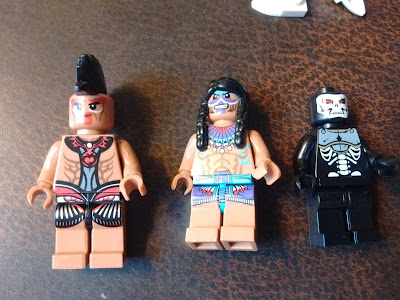 The biggest flaw in Enlighten minis is the gap between the legs and hip. This gap is noticeable, it makes the people look less real, and it makes the legs wobble in a way that feels insecure. It makes the Enlighten figs slightly taller than Lego figures. 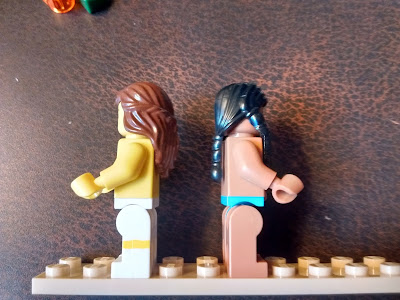 Enlighten legs are compatible with Lego hips. You can move the leg over to a Lego fig, with about as much force as it takes to switch out Lego legs, and it fits well. There is no gap, although the movement is a bit looser than Lego legs. So the difference is the mold that Enlighten uses for the hip. 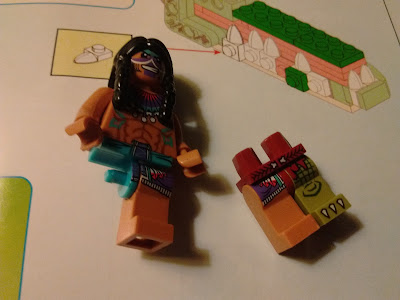 Aside from that, the figures are great. The quality is good, the paint is good, and the art design is great. These minis, despite their hip gap, will be a good addition to my collection.

The biggest concern with off-brand bricks is the quality. Overall, I was very impressed. The bricks are obviously not as good are Lego, but they are at least as good as the collector-series Mega Bloks. The fit is sometimes a bit tighter than Lego, but overall they fit well and are easy to assemble. Most of the time they have a 'click' that feels almost exactly like Lego, although there are a few times they do not.

There are two types of pieces. Some have blank studs, and others have 'ENLI' printed on each one. The printed ones are noticeably better quality; they have obviously upgraded molds but are still using up the old ones to save money.

A couple of bricks had visible mold flashing, and occasionally I would have to trim this off with a knife for a good fit. In most cases it was easy to remove, coming right off without leaving a mark. 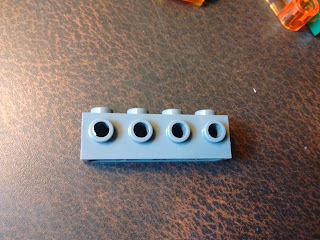 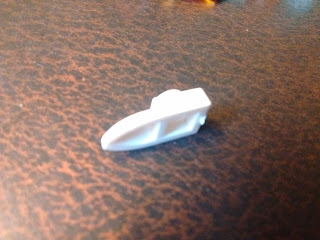 However, several of the the claw pieces had mold problems that made it impossible to fit them where they needed to go, and required quite a bit of knife work to scrape down. 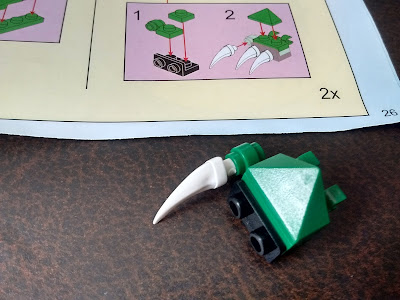 The set has several pieces I have never seen Lego use. One is a Mega Bloks piece, and another is an interesting sliding mechanism. 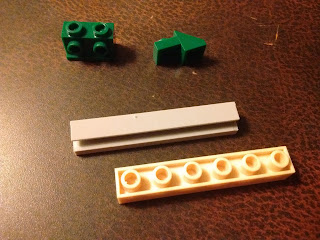 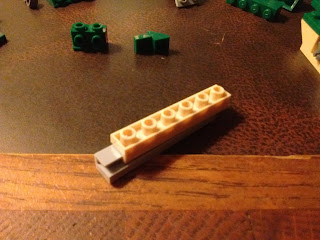 These tube pieces, fitting over a stud, are interesting. They are designed to securely connect a stud upside down. I have never seen them before, and I like them, even if their very tight fit makes them hard to remove. 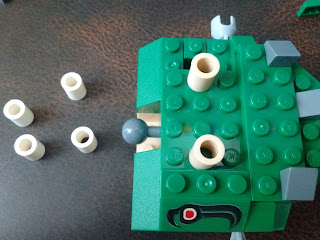 The set uses two sizes of ball-and-socket joints. Each piece is a mold unique to Enlighten. There is a larger joint, used for the body connections, that is almost the size of the large Lego ball-and-socket joint but not compatible. The joint used for the feet is their own size, about halfway between a Mixel ball joint and the larger ones. It has good range of movement and a decent ability to hold a pose.


The instruction booklet is very good, better than Mega Bloks. It was easy to follow. Blocks from previous steps are faded out, which is nice. Lego used to do that, but then they stopped for some reason. The number of pieces added per step is more than most modern Lego sets, as are the number of steps printed per page. They are about equivalent to what Lego instructions were like when I was growing up. I prefer this, it always annoys me to see a whole page of an instruction booklet spent on adding just a couple of bricks.

The design of the set is good, competently using studs-out techniques and Technic-style pieces. 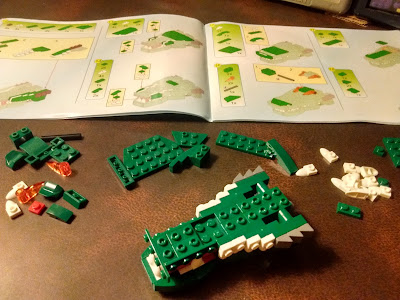 Overall, it felt more like putting together a Chima vehicle than an off-brand set. The build progressed easily for the most part. However, the looser tolerances meant that I sometimes had trouble attaching a larger subassembly onto the main build.

Bag 1 was the minifigs and crocodile head. Here is the build before opening bag 2. Note the extra tooth, the only spare piece in the whole set. 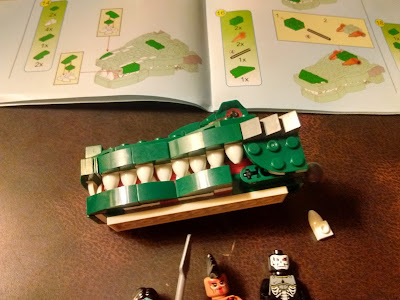 As with Mega Bloks, the design is very piece-dense. Lego designers are masters of using a small number of pieces to make something that is larger. Compared to a Lego build, this set has a lot of pieces and detail for its size, making it feel more like a fan creation. It also feels very solid and hefty when completed. 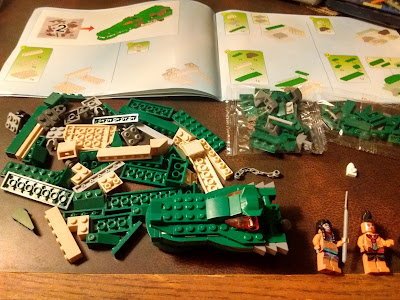 Bag 2 in progress. Notice the sliding pieces. I did not know what they were for. 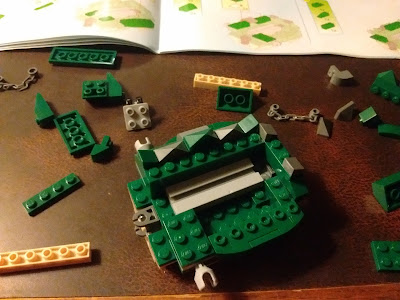 At the end of bag 2, the build surprised me with an excellent play feature:

I had no idea this was coming, I assumed that the jaw required manual posing. This is a nice trick, one that I have not seen Lego or anyone else use. Enlighten clearly has creative designers that are working to build fun things from scratch.

However, the jaw mechanism is not that robust; it often comes apart in play. A better design would lock it in place with some sideways-stud building, or at least a few more connection points. 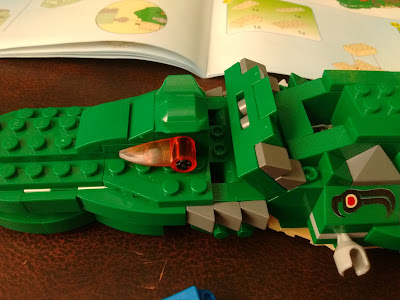 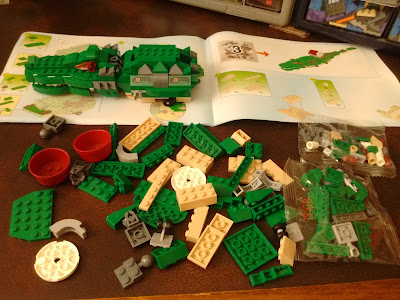 In bag 3, the instructions call for an illegal connection. It is a sign that they do not really understand things like Lego designers do, but also a sign that they are being creative and not just copying. 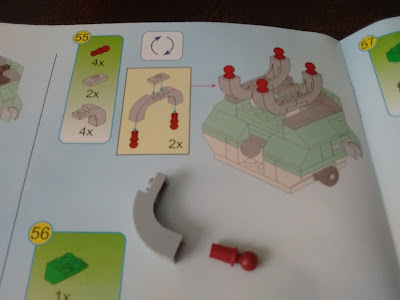 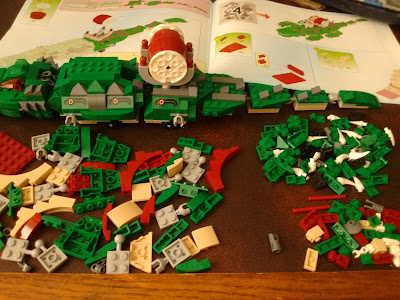 And the completed model: 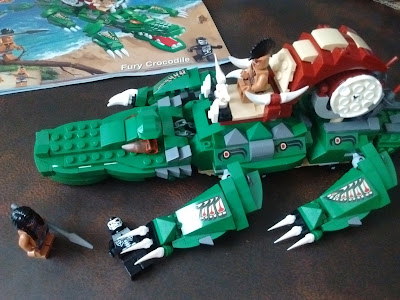 The model has lots of joints and is very poseable. This is not apparent on a flat tabletop, because the bricks on top restrict freedom of movement, but becomes apparent when you put it on irregular terrain like the back of a couch.

In general, it is solid and fun to play with. Nothing falls apart, aside from the occasional disconnection if you snap the jaws a lot.


I am very glad that I got this set. It surpassed my expectations; the piece quality is good and the set is well-designed. It cost $20 but it looks and feels like $40-$50 Lego set. It compares favorably to Ninjago dragons and Chima vehicles, and the minifigs are a great addition to my PC creation tackle box.

I would not buy it for a child who was used to Lego, because children hate the feeling of getting something 'strange' or 'inferior', but it is perfect for a teen or adult hobbyist who wants decent cheap bricks and/or more variety to their minifig collection.

Enlighten has become a respectable off-brand, comparable to Mega Bloks. You can see from looking through their catalog that they have very interesting original designs, and that they are producing a lot of themes that Lego is not currently selling. I will be buying more, especially if they put more sets in their Amazon store.