I have been using Lego dice in my games for years. I keep them in my dice bag with all the others, and we roll them to randomize things and inspire storytelling. They get used every session: 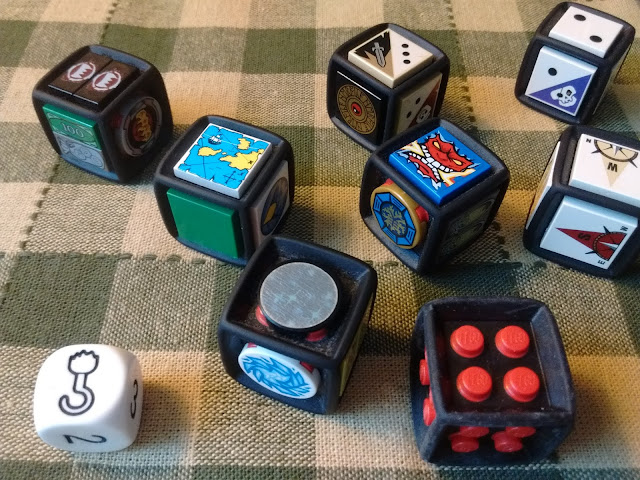 The dice have six faces that can take a 2x2 Lego plate, or a combination of smaller plates. The rubber on the edges makes them bouncy and protects the plates. There is a blank one, with no tiles attached, on the bottom right of the picture above. They came with the discontinued Lego Games sets, and you can customize them by adding whatever tiles you want. Most large collections will have a lot of these blank, stickered, or printed tiles.

I highly recommend buying some and using them, especially if you have interesting printed tiles sitting around. The dice are incredibly cheap on BrickLink. I got 20 of them for less than $5 including shipping, and prices have not changed since, although not many sellers have enough of them to justify the shipping. You may want to combine the order with other parts.

As with everything Lego, the possibilities for custom dice are as endless. For example, you could choose a color or icon to represent each party member, and have a die to roll when you need to select a random person. Here are some of the mainstays of my game:

The Heroica dice (below), used for the results of searching, crafting, and negotiation. Roll it with the d20 skill check. The number represents the number of things you obtained with a successful roll. The other icons may, depending on the situation, represent complications or obstacles that you have to overcome. So if you roll to search a dungeon for clues, the two pips and a skull side represents finding a couple things but also triggering a trap. The gold shield side represents extraordinary success.

A dice for the six elements of earth, air, fire water, light, and dark

A dice with the terrain types/locations of forest, mountain, ocean, desert, wildspace, and underdark.

These dice, singly or in combination, are a great way to determine what happens when players create or investigate something unexpected. I'll have the player roll a couple dice, and usually the results give inspiration to help me come up with the thing that happens next.

The die in the bottom left is a Lego piece that came with a few Adventurers sets from 2003. I use it as the 'Plot Hook Die' in my games. Whenever a player rolls a downtime skill check they are proficient in, they can replace their proficiency bonus with a roll of  the plot hook die. The numbers add to the result, but if the hook comes up, it means that their roll, good or bad, causes a significant change in the plot, or at least causes something interesting or unusual to happen.

A Plot Hook accompanying a low roll means that the skill check revealed or created an emergency that will have to be dealt with immediately, while high numbers represent uncovering fantastic opportunities that will give great payouts if the party pursues them. A medium roll means uncovering an interesting side-quest opportunity that will probably be more lucrative than a standard mission. In all cases, I encourage the players to tell the story about what happened.

For example, someone rolled the Plot Hook Die on a routine diplomatic mission to open trade relations with a city of minotaurs in the Underdark. The result was a 1 and the plot hook. The player decided that this meant that the minotaurs had been taken over by a hostile invading force of drow. Dealing with this drow invasion and its side effects ended up taking up the next year of the campaign.

The decision of whether or not to roll the Plot Hook Die added a great dimension to the game. If players felt that the game was already complicated enough, they avoided it. If they wanted to shake things up, they chose to roll it. It, like the other Lego dice, has been a great addition to my dice bag, and I would not want to run a game without it.