As always, the lineup of Lego sets has changed in the year since my last recommendation post. All sets here are available on shop.lego.com, which means that they are also in most stores, although you can usually get a 10-20% discount by going to amazon.com or walmart.com. Within each section, they are listed in roughly descending order of how much I recommend then.

If you are just starting to use Lego bricks and minis to run a fantasy RPG, see my Starter Guide.

These are my top recommendations while the price lasts, but you should not expect them to be available at this price (or at all in standard stores) for much longer:

Water Dragon Adventure: For some reason, this very nice $20 set has been available for under $13 on the Amazon, Walmart, and Target websites for months now. As always with Elves sets, the terrain is really good, perfect to be dropped into a game, but the dragon is the main attraction. It is way too cute for non-evil parties to kill, but you can easily fix that by replacing its head with something meaner-looking: 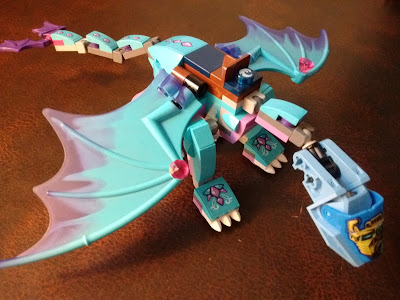 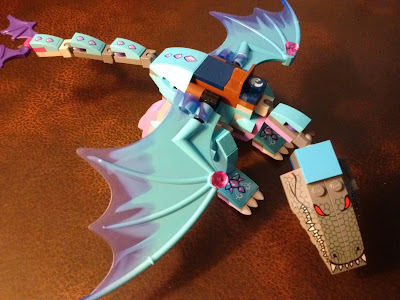 Each set usually comes with a spare dragon wing, so grab two. Make one according to the instructions, modify the other to make something a little different, and then use the extra pair of wings to make something completely new.

Kryptarium Prison Breakout gives you five useful minis, including a four-armed one, and terrain with good play features that can easily be a fantasy dungeon after you take off the phone and security camera. It would be a good value for the list price of $20, and it is currently being sold for $14 on the Amazon, Walmart, and Target websites. This is a good one to grab in multiples, especially if you need more minis and dungeon terrain.

The Lighthouse Siege is the best traditional-castle-like thing in the current lineup. This $70 set, currently marked down to $54 on Amazon and Target, gives you get a nice solid stone-and-brick tower full of good play features. It is relatively easy to take off the oriental-styled elements and make it more like a basic medieval castle tower, and the modularity of the build allows you to make it a flat series of dungeon rooms. It also has a good selection of minis, both heroes and monsters.

Classic Creative Supplement is another $20 set that is on sale for $14 in several places, and it is the best deal for basic bricks suitable for a fantasy game. As I showed in an earlier post, you can make a lot of good terrain with it. 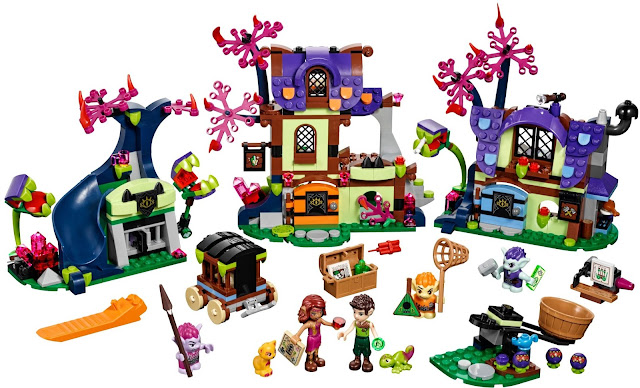 This is my pick for the year's best Lego fantasy RPG set. All of the Elves sets are really nice, but this is the best. It is absolutely fantastic, in several senses of the word, and is perfect for a gnome, halfling, or fae village hidden in a mystic forest. In addition to looking great, this set is absolutely packed with really nice little features that invite all kinds of exploration and interaction. The 'boy' sets are focused mainly on combat, and tend to have little play value beyond that, but the 'girl' sets are designed to have dollhouse-like features, and to look and feel like real places that people might actually live in.

The Vermillion Attack is probably the best value for the money at list price. For $10 you get three useful minis and a very nice terrain piece. I almost never buy Lego at full price, but I got this one when it appeared on the shelves. For best results, add a circular plate to the technic axle in the bottom of the egg so that the snakes fly out when you open it: 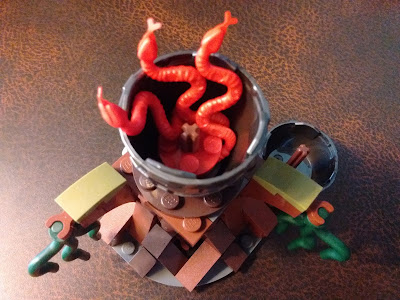 The Goblin King's Fortress is loaded with new and interesting pieces, including greenish walls and red leaves. It makes a very good plant-infested mystic fae dungeon/castle in a way that is almost impossible to duplicate with past Lego sets.

Mighty Dinosaurs: This $15 set includes instructions for three giant creatures to fight, all of which are well-designed and teach you good techniques for integrating Technic and Lego parts in a large-creature build. Normally I'd recommend it highly, but it can't compete with the $13 water dragon set, which has a similarly good creature and also a mini and terrain.

Moana's Island Adventure: Licensed sets cost a bit more, but variety in settings and people is valuable for running games. This is the only set in the current lineup that will give you a native/islander/wood elf style encampment.

Nexo Battle Suits: At first I dismissed these as having little value relative to my other recommended sets, but after getting some on clearance for $5 and experimenting with them, I realized that they can be useful. The suits can, with a little work, represent enlarged, polymorphed, or wildshaped heroes. Change them to look like a giant person or animal, and put the mini in the cockpit. Or just fill the cockpit with bricks and stick a head on it to make a giant. And the five nexo power shields they come with can be turned into nice minifig equipment.

Ruina's Lock & Roller: For $20, there are three good minis, two of them female, and if you took the wheels off the vehicle and turned the big gray ones into static terrain pieces, you would get some good dungeon terrain.

Heartlake Riding Club: This is the closest we are going to get to a realistic medieval-village building in the current lineup of Lego sets.

Treehouse Adventures and/or Lakeside Lodge: All of this year's 3-in-1 Creator location sets are too modern to use, but last year's are still good. Each one has instructions to be rebuilt into three good adventure locations, and once you have experience building these from the instructions, you should be confident in your ability to make similar things from a pile of loose bricks.

Raid Zeppelin: This $30 airship packed with awesomeness may be a bit too much magitech for some fantasy games, but Spelljammer or Planescape fans will love it.