As always, I am suggesting new sets that are a good value for interesting minis and terrain pieces. In general, this means cheap sets for little kids, which are designed to be played with, rather than expensive sets for adult collectors, which are designed to look good sitting on a shelf. And I am focusing on getting a diversity of pieces, so you can have something appropriate to represent a variety of situations and environments.

In the last post, I missed a lot of things that came out in June 2021. They should still be available in normal stores, so I'll be including them here.

The top recommendation this year is the $40 Ninja Training Center:

The design of this is exactly what you want for your games: small terrain pieces that can be put on a grid in a variety of configurations, and used in any combination, to set a variety of scenes. The minis and elements are also useful in many situations (just leave the ninja hoods off and they will start to look like a generic adventurer). You may or may not use the spinning thing in a game, but that clear piece would make a good air elemental if you put it on a baseplate.

Other Ninjago sets are also a good choice. For the last 10 years or so, the Ninjago theme has been reliably delivering sets that are good to use in a game. There's usually something a little better, like Elves or Hidden Side, but if someone wants to get you a present, just tell them, "Get me a Ninjago set that isn't a car or airplane" and you will probably get something that works. This year, the standouts are the $10 mechs, the $20 blue dragon, and Final Flight of Destiny's Bounty. There is also a nice-looking line coming out in August, which I will discuss in a future post.

The $10 and $20 Eternals sets, Aerial Assault and Deviant Ambush, have a good mix of interesting characters and brick-built monsters: 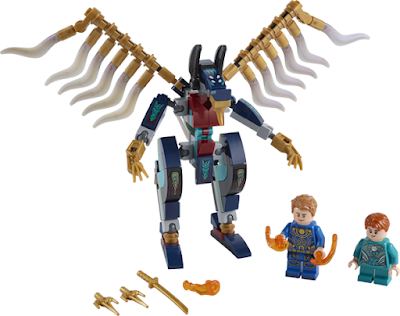 Similarly, Attack on New Asgard gives you three minis, an always-useful zombie and two with armor that would fit well in a fantasy RPG world, as well as a plant monster that you will probably find yourself reusing a lot, with some modifications.

As usual, there is a good 3-in-1 rustic structure, the $30 Safari Wildlife Tree House: 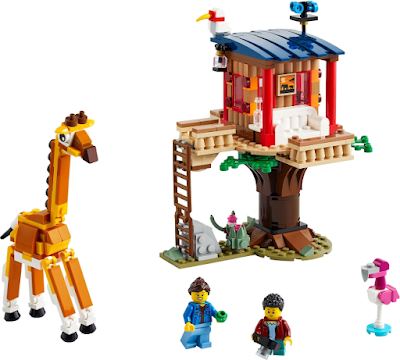 It can be used as is, or rebuilt into something like a guard tower with different aesthetics. There are a lot of situations where you want a structure up in a tree, and never underestimate how much more fun the game is with 3-D playable terrain. The minis are useful as civilians or unarmored adventurers, and having good brick-built animals that can be used as a mount is always a bonus. Just take that slope piece off the giraffe's back, and sit an enemy with a ranged weapon on it for an interesting combat encounter.

Another good value is the Market Stall polybag: 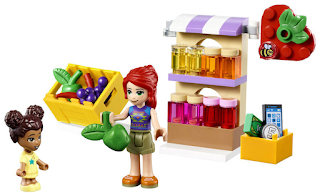 For only $1 more than a collectible mini, you get two people, a shelf of potions, a crate of fruit, and some other good elements. Hermione's Study Desk is also a good mix of a mini, terrain pieces, and useful elements.

In general, I encourage people to get the $5 polybags rather than collectible minis, because they often have little terrain pieces that are easy to store and transport, and work well to set a scene. This year's Shang-Chi and The Great Protector polybag has a useful minifig-scaled creature instead of terrain. Many Lego creatures are much too large, and it is always nice to get something that would fit in four squares on a 1-inch grid.

Friends sets can be a good source for rustic or medieval-looking village terrain, and I find that their aesthetic is a good way to balance out the Ningajo and superhero sets to make a more balanced game world. Forest Horseback Riding Center could be turned from a single large structure into a medieval village set with a little re-engineering, and the Magical Caravan can round it out into a magical fairyland village. Similarly, The Madrigal House gives you a good village house with a terracotta roof style, which is very useful if you want something with a Roman or Mediterranean feel that has historically been very underrepresented in Lego builds.

I wouldn't pay full price for it, but the Punk Pirate Ship has some nice minis and elements with an interesting magical ship, and I'm guessing it will go on clearance pretty soon, so you might be able to get it cheaply. 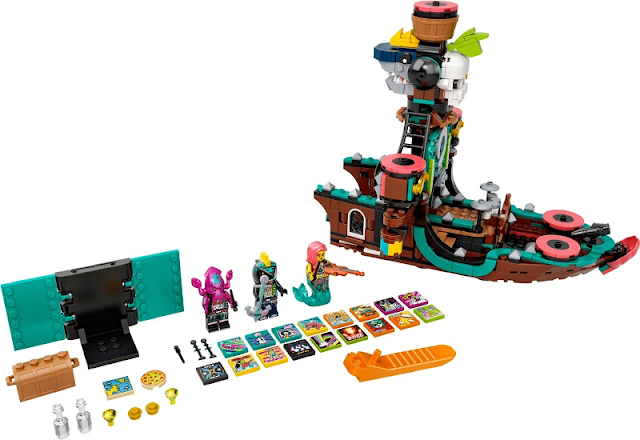