I've written that medieval fantasy RPGs are impossible: the existence of powerful magical adventuring heroes will change the world so that it no longer looks or feels medieval. It will not be a world of knights and serfs and castles and sieges and conquering armies. So what should a GM do with this information? Most playgroups don't like being subjected to complicated world building, they want to just jump into a game with a familiar genre. A good solution, especially for American gaming groups, is one that I have been using for over a decade: Frontier Fantasy. Model your game after the conditions and stories of the American frontier. 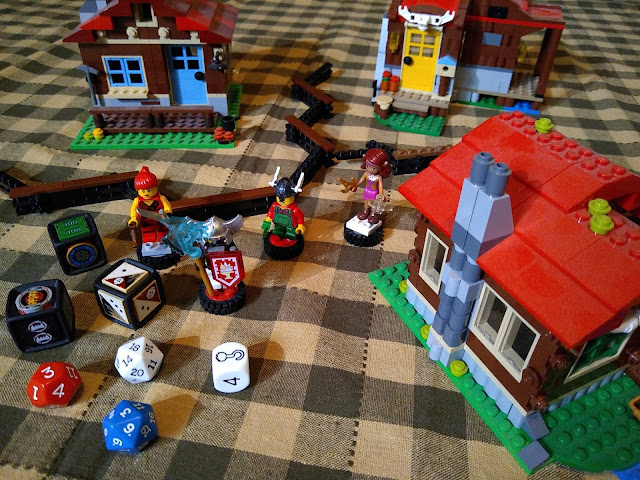 I usually set my games in a world of log cabins, homesteaders, and small villages and forts on the edge of a rugged howling wilderness, where government is limited and people have to be self-sufficient. The environmental and cultural details are loosely based on the Appalachian Mountains in the 1700s, because I live and grew up in the eastern USA, and most of my players did as well. If you're out west, or you are not American, then the Western will be more familiar to you, so your game would resemble a story in the Weird West genre.

The setting does not require any changes to the rules of the game. Everyone makes their characters just as normal. All of the normal features and tropes of the game, like kung-fu monasteries and dwarf fortresses, are still there (although you should keep the scale smaller: make the monastery like a frontier mission, with a few dozen people). The religion is the standard polytheistic mix from the rulebook. But the overall feel and tone is that of a Western, and the overall social and political climate is that of self-sufficient pioneers rather than lords and serfs.
The setting includes many things that would be anachronisms in a medieval world, but are part of pioneer adventure stories. There are banks, saloons, and trading posts. There will often be a one-room schoolhouse in the local village (although the teachers are likely to be religious volunteers rather than state employees).
I still keep the weapons tech level medieval, like in the rulebook: normal people do not have access to firearms (although they may be found as treasures in the ruins of ancient civilizations, or expensively custom-made by artisans). But the homesteaders will have things like home canning, wood stoves, farmer's almanacks, etc. Most people are literate, and own a few books, including the scriptures of their religion(s).
There are several benefits to this approach:
1) You are kind of already doing it, so you might as well do it right. Most tabletop RPG worlds feature villages on the edge of a wilderness, in a way that simply did not happen in any other time or place than the American frontier. Most game modules make a lot more sense if you assume a frontier-like setting with limited state capacity. In recent rules editions, all PCs are literate. Most PCs are, in practice, much more like Daniel Boone than King Arthur. You might as well make the setting explicit, and make it clear what genre the game is in so everyone understands the situation.
2) The game's shared reality is more real and vivid. I find that it helps the game immersion a lot when the game world is based on real history, or things that people have personal experience with, rather than a genre trope they have only seen in fiction. Very few people have any real understanding of the society, culture, mindset, or politics of the Middle Ages. But most Americans grew up with stories of frontier life and its heroes. Many people have been to Colonial Williamsburg or a similar living history location.
3) It is much easier to get the details right and play the NPCs. The GM and players are writing a story, and it is much easier to write what you know. I have no idea how to role-play a Medieval Prussian peasant or lord, but I have some idea of how to play an frontier-era Appalachian homesteader or small-town mayor. In addition to the built environment and its people being something everyone is much more familiar with, the land itself is as well. I have no idea what kind of berries, if any, people would go out and pick in medieval France. But I, and my players, know exactly what a blackberry patch looks and feels like, what kinds of dangerous animals you might encounter while picking them, what foods you make with them after you gather them, and what these foods taste like.
4) Less state power means that individuals have more agency. On the frontier, the military engagements were much smaller, the opportunities for adventure and exploration were larger, and the actions of individuals from a humble background could matter more. Many of the real-life frontier stories remind me of things that could happen in a tabletop RPG. This is why the Western is such a popular and enduring genre. In a land not ruled by the machinery of cities and courts and empires, the character and choices of individuals matter.
5) The inner lives of the people were much more recognizable. The medieval mind is alien to most modern people. Their basic assumptions about the world, the things they valued, their bedrock beliefs about what people should do in a situation and why, were very different than ours. Most authors and GMs simply ignore this fact, by making people think and act in anachronistic and modern ways. But you can't just drop modern thinking into a historical socio-political system and have it make any sense. (I don't think it is a coincidence that the French Revolution happened soon after modern ideas and mindsets started to spread through the population.) By contrast, the actions and motivations of frontier people are a lot more familiar and modern. There were huge changes in culture between the 1400s and the 1700s.
6) It is much easier to explain a Frontier game setting to a new player or child. A lot of people you might want to introduce to the game, especially children, have never read the stories that inspired the medieval fantasy genre, and some of them never will. You don't want to limit participation in the game to people who have read Lord of the Rings. And you don't want to have to explain the Middle Ages, or any unfamiliar RPG setting, to a 9-year-old child. But if she's read Little House and American Girl books set in the frontier, you can quickly get her into the game by saying that the world is like those books, but with magic and non-human creatures.

Why Is There Wilderness?

Historically, it's quite rare for any usable land to remain uninhabited or under-inhabited. People will find a way to use the land, to build settlements, and to fill it up. Wilderness areas attract settlers, and sparsely populated frontier-settler areas usually become established farming communities within a generation. You don't have to think about this for a one-shot, or a casual game, or if your playgroup doesn't care much about backstory and worldbuilding. But eventually it might come up, so it is useful to think about. Where did the wilderness come from? There are several options.
1) The gods made the world (or just this continent) very recently. Most games assume a very old world, but this is the simplest answer, and it can be a fun twist. There was never any time for things to reach equilibrium, because you are part of the first colonization wave.
2) The wilderness was once full of terrible monsters, but for some reason they got weaker. In the past, monsters were too numerous and powerful for the land to be settled, but now people can confront and defeat them, or find places to live where they do not tread. Perhaps there is some kind of grand cycle to the forces of darkness and chaos, which causes the power of dragons and other monsters to wax and wane over centuries. Or maybe someone cast a great spell to weaken their power and allow people to move in.
3) The land was once the home to a thriving civilization, which was ruined by a terrible calamity. This is my preferred option, and it matches what actually happened in history. The previous inhabitants of the land were nearly wiped out by some kind of horrible tragedy. (Unlike our history, I have the fallen civilization be a higher tech level, and leave lots of treasure-filled ruins that can be discovered and explored.) Understanding the background of this tragedy and what caused it can be one of the themes or overarching plots of the campaign.