This post is only loosely related to Lego, except that gaming with Lego tends to encourage the kinds of creativity and tinkering that makes these rules necessary (and because Lego terrain invites so much game-consuming investigation of everything interesting-looking that I needed a way to cut down on the searching and move the game forward): 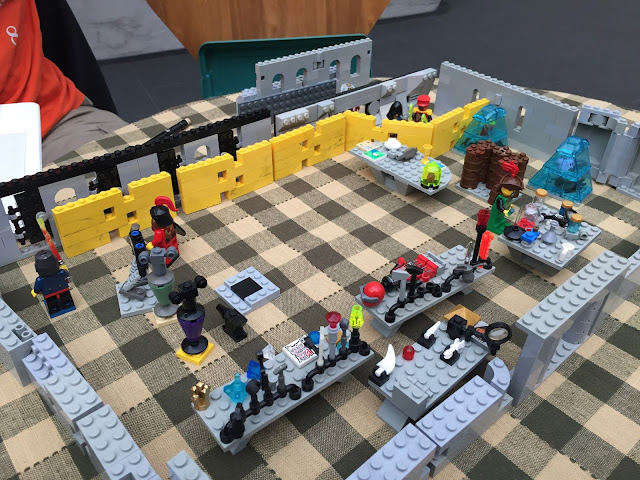 I use a homebrewed system of handling activities that has proven to work very well for five years of sandbox gaming where the characters want to do lots of things. The core mechanic is that every time a character wants to undertake some significant task or project, they spend one or more hit dice. Hit dice represent an overall pool of energy, vitality, and competence that can be used for many things other than simple recovery. This means that leveling up allows characters to be more competent and productive out of combat, which is especially important if the game ends up focused on politics and skill use.

When a character spends a hit die, they roll a skill or tool check to see the results. Because these checks represent many hours of sustained work, they cannot be boosted by things like Guidance, bardic inspiration, or anything else that would boost a single skill roll. Characters are assumed to be using all class abilities that could be helpful or increase productivity, like spellcasting, Fast Hands, Action Surges, etc., which is part of why high-level PCs can undertake more projects than low-level characters.

I changed the long rest rules so they restore half of a character's hit points and all of their hit dice. Characters who are wounded from adventuring must spend hit dice to heal until they are up to half of their hit point maximum before doing anything else, and in times with no combat, characters can undertake a number of projects equal to their character level per long rest.

Looting
In the field, I give the characters one free check after each combat encounter to search and loot the enemies or the environment. If they want to investigate any additional things, they must spend a hit die per investigation. This forces them to make choices and keeps the game moving.

Using normal guidelines, decide how much loot the encounter would normally give. (I prefer to combine the hoard and individual creature loot and spread them out more equally among encounters, using a method kind of like the 4e treasure parcel approach.) Then double that amount and divide by the number of characters. When the characters do their first free loot check, they get that value of loot, of a type appropriate to what they searched, if they beat a DC 15 check. The DC should increase at higher levels, to reflect the fact that such rare and esoteric loot is harder to properly identify or harvest.

As a general rule, further checks done by spending hit dice will normally give about 25 gp worth of loot on a successful check, similar to using a hit die to earn income as described below. You can raise this if they are in a rich environment and/or you want to encourage pushing their luck by spending their potential healing to loot, or lower it if the looting would not result in much or you want to discourage this behavior. However, you might rule that if most or all of the initial free checks failed, they can get their loot by spending hit dice to keep trying.

I prefer using Body Part Loot, where most monsters 'drop' interesting magical ingredients rather than gold or art items. These are extracted from the corpse with Medicine or Arcana checks, or an appropriate tool proficiency.  They can then be crafted in downtime as described below.

Downtime Projects
I use this system with the 'Gritty Realism' long rest variant where a long rest is several days of recovery and happens once every week or two. All example projects below are based on that system. If you use it with the normal rest variant, make the projects and income smaller to compensate.

In downtime, each hit die spent allows a character to roll a check to accomplish a single task that could be completed in an afternoon of intense work, or several days of intermittent work, like:
*asking around to uncover a piece of information.
*investigating an item.
*negotiating a simple deal.
*writing an important letter or report.
*teaching a simple task to a henchperson.
*finding the right person for a job position.

Larger projects and long-term goals require more checks, ranging from a few successes to over a hundred successes in various tasks.

If used to rest and recover, spending one hit die in downtime allows you to roll a Constitution saving throw as described in the Recuperating subsection of the Between Adventures section

Earning Income and Crafting
For small simple low-risk projects, or practicing a profession, simply spend a hit die, roll a check, and have the gp income or progress be the total check result. This matches the normal rules for crafting or following a profession, assuming an NPC or low-level character with one hit die. When doing something they are skilled in with a good stat, and spending one hit die per long rest to do so, they will earn or make an average of 15 gp per long rest, or about 2 gp per day of income or value added in the crafting.

For example, if a character with smith's tools is attempting to craft a halberd (cost 20 gp), they will need to spend 10 gp to rent a forge and and buy steel, coal, and other supplies. If the check result is 10 or better, they complete it with their hit die of effort. At your discretion, higher check results can be turned into additional item crafting or income, so if the result was a 15, the character completed the halberd early and then earned 5 gp by working as a smith.


A more math-intense option for high-stakes projects like working with volatile ingredients or gambling is to set a breakeven DC of 10 to 15, subtract that number from the check result, and multiply the difference by some number based on the stakes. This multiplier should be at least five and could be much higher.

For example, a character playing games at a medium-stakes table might have a multiplier of 10. Any game involving bluffing is a Wisdom check with the gaming set proficiency, while pure games of skill are based on Intelligence. An average table of adventurers or soldiers would have a breakeven DC of 12 (base stat +1, half of them add a +2 proficiency), so if the character got a 20 on the check, they would gain 80 gold, but a check result of 10 would lose 20 gold.


Characters will often want to use hit dice to craft magic items, especially if they have accumulated an inventory of interesting magical ingredients. I follow the same rules for crafting both magical and nonmagical items, as well as ships, strongholds, etc. and any other activity that earns income. I allow any character with a tool proficiency to craft magical items if they have access to appropriate magical ingredients (In my opinion, any rule system that does not allow a dwarf smith to craft a magic weapon out of exotic materials is simply wrong).

Mark progress for all expensive items and large projects in units of 50 gp. Passing a DC 15 check makes 50 gp of progress (i.e. turning 25 gp of ingredients into 50 gp worth of completed item). Failure means no progress was made and nothing was wasted (unless a critical failure was rolled). This means that, on average, each hit dice spent will add about 15 gp of value to the ingredients, assuming a decent check modifier. I set the value of common items at 50 gp, to match the item cost pattern and encourage their creation, so one successful check will turn 25 gp worth of ingredients into a common item worth 50 gp. Crafting an uncommon items requires 250 gp of ingredients and ten successful crafting rolls, and each level thereafter is ten times as expensive. This matches the item creation cost in the DMG, when you consider the opportunity cost of the character's time.