Early on in my current campaign, the party fought some carrion crawlers: 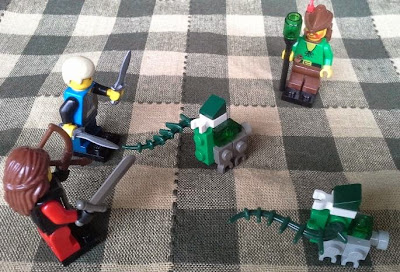 After the party killed the crawlers, they decided to try to extract poison from the bodies, and rolled a 20 on the skill check. I ruled that they had collected several doses of Carrion Crawler Mucus, but had also removed one of the tentacles in such a way that it would, for a few days, function as a whip that could be made to generate a paralyzing effect, somewhat like a Dagger of Venom.

The next day, the party defeated some skeletons and zombies, and after the battle they managed to use the leftover necromantic energy to zombify the carrion crawler tentacle. The ranger named this undead carrion crawler tentacle Mr. Wiggles (because it sometimes writhed around on its own) and made it her primary weapon (the secondary weapon is a short sword made from a demon's horn): 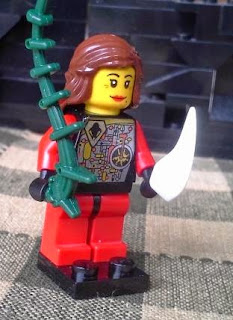 Lego bricks encourage these kinds of fun stories. But the D&D rules assume that all treasure comes in the form of money, gems, art objects, and fully formed magic items found in treasure hoards. In order to make the best use of bricks, it helps to make some adjustments to how you hand out treasure and how the characters create magic items.

The core change is that whenever the party fights anything magical, you replace the specie treasure with rewards of magical body parts of equivalent value. Instead of getting 150 gold pieces, the party gets 150 gp worth of displacer beast hide, or elemental fire, or the heartwood of an evil treant. If you have enough bricks, you can let the players collect the actual Lego pieces taken off enemies and keep them with their character sheets. Once the party accumulates enough of these magical ingredients, they can convert them into magic items.

In a few cases, they the players will actually be able to build the magic items, by connecting up Lego pieces. A lot of maces and axes can be constructed from a rod, a connecting brick, and decorative elements like teeth, jewels, or colored transparent plates. The Chima sets have shields and armor that can be customized by attaching decorative elements to them. But in many cases, you will have to do the exchange, for example by giving them new hats, and some magic items are too small to be placed on the minifig.

This system allows the players to accumulate magic items at the same rate as if they bought or crafted them, so it should not change the game balance. (If you do not allow the players to buy or craft magic items, then the only thing they can spend all their money on is strongholds or ships, and then you are running a completely different kind of game.)

I think that the system of making magical items in this way is much more fun and flavorful than the 'get money, spend money' system. It is more primal, connecting closely to heroic myths of self-sufficient adventurers, and it is especially suited for a campaign in a wild, primitive, or frontier environment.

When using this system, I'd recommend not not limiting magic item creation to spellcasters, and not assuming that they must be carefully crafted in a lab. A barbarian can make a magic axe by ripping the teeth out of a T-rex with his bare hands and lashing them to a branch of sacred yew. A fighter with proficiency in Tinker's Tools can craft a magic suit of plate mail by incorporating a small token taken from every enemy that has ever landed a blow on her. A monk can grind magical materials into inks and give himself tattoos that duplicate the effects of rings or wondrous items. A rogue with jeweler's tools proficiencies can make magical necklaces and rings that derive their power from the magical items incorporated into them.

You have several different options for how you approach the details of handing out body part loot.

1: Minimal Change, GM Control
You could follow the DMG exactly as written, sometimes rolling on the individual treasure tables and sometimes rolling on the treasure hoard tables as the guidelines suggest. In this system, most monsters just have a few scraps of magical materials, but the big memorable ones are a hoard of valuable body parts, sometimes even magical items than can be directly taken and used. You tell the players what the materials are, and when they have accumulated enough materials, you tell them what they were able to make with them. Use this method if you need to keep tight control of the game, or if your players are not interested in spending any time on item crafting.

2: Consensus Budgeting
Decide the GP value of the magical materials available from the monsters the party just killed, either by rolling on the treasure tables or using some other method. Tell the party what the value is, and that they can channel this magic into something from the monster. For example, if they decide that the tank needs better armor, they can choose to channel the magic into solid things like hides, and harvest them. Have them track all the parts the party has collected, and their gp value. (If they want, they can split it up, like splitting up gold, and all do their own thing, but this will mean that the party as a whole is weaker, because they all get their items later. It also requires more work.)

When they get enough gp worth of material, and they have some downtime to craft it, you give them a suit of magic armor. You can determine the item randomly, or choose it based on what kind of material makes up the plurality of the item. Depending on your campaign, you might let the players choose what they want to make, although this choice should cost them a bit extra.

For a high-magic campaign, the cost should be the base crafting cost of the item (you are letting them craft without spending any significant time). For a standard campaign, double the cost, to match the assumed difficulty for turning gold into magic items. For a low-magic campaign, triple or even quadruple the cost.

This method is suitable for groups that prefer a numbers-heavy game and are used to tracking resources and controlling how they are spent.

3: Story Based
After big or interesting fights, tell the players that they have the opportunity to harvest something magical. Let them tell a story about what they want to do. Assign the treasure based on the best story that is told. Use this method for freeform theatrical play groups that trust each other. Encourage stories that build bonds between characters or give the item to someone else. A winning story might be something like this barbarian's:

I pull my axe out of the dragon's skull, and with savage yells of triumph, use it to start butchering my fallen foe. I break its spine, and then cut open its side, and then I cut out the rib that was closest to its heart. This gives me a staff made of a rib, with the bones of the spine still attached. I take this bloody trophy over to the wizard, and hold it out, saying, "If you use this as your magic focus, instead of that sissy wand, you will draw upon the primal power of dragonkind. Are you willing to leave your dry books behind and get your hands dirty?"

4. Skill Based
This is my preferred method. It is the biggest deviation from the rules, but our group enjoys it a lot. It allows for more dice rolling and excitement, and gives the fun of item accumulation while making character inventories more interesting and flavorful.

After an encounter, all players decide what and how they want to loot, and roll a check, using any appropriate skill or tool proficiencies. The check represents over ten minutes of sustained work, not a single action, so treat this as a downtime action and do not let them use anything that would boost skill checks temporarily. However, you can give inspiration, and allow them to take advantage on the roll, if they tell a good story about what they are doing.

If they roll a natural 20 using a check they are proficient in, they get a magic item appropriate to their tier that can be used immediately. (Level 1-4 uncommon, level 5-10 rare, etc.) Choose something appropriate, sometimes giving a permanent item and sometimes giving a temporary one. Over the course of the campaign, these lucky rolls will give enough items to replace the high results on treasure hordes, so when using this system on a lot of encounters, it should be much rarer than usual for them to find an actual treasure horde.

Otherwise, on a successful check, the looting was successful and they get magical materials. Set low DCs like 10 to 15 for more magical things or when you want to give more loot, or a DC of 20 for things that should not result in much magic material. All DCs increase with level; rare and exotic materials are harder to harvest. This replaces the specie loot from individual monsters and most hoards.

To determine the total value of materials to award in an encounter, use the individual treasure table to calculate what that would be awarded based on monsters fought, double it, divide by the number of characters, and have each person get about that much value of materials on a successful skill check. For simplicity, every material's value is a multiple of 25, and at lower levels, most materials they loot will be worth 25 gp. At lower levels, describe each item individually, so their inventory fills up with interesting things. At higher levels, you can abstract them a bit more and have each item be worth more, telling them the total value.

At low levels, each encounter will usually yield one or two materials valued at 25 gp each, and many magical materials will be monster body parts that turn into healing potions. Base your descriptions off of the things used in Chinese traditional medicine.

They can also harvest magical materials from humanoid enemies. This comes not from body parts, but from gems, art objects, or magical trinkets that the people were carrying. Have the players roll on the trinket table to see what they got, and invite the characters to unlock value from such trinkets by making them the base for more powerful items.

During downtime, anyone with an appropriate tool proficiency can try to craft an item, or they can hire an NPC to do it. If they have a magic item formula, they can make that particular item, but usually the best they can do is try for a type, like armor or wand, and see what they get. You can decide what is appropriate based on the materials used, or make it a random roll on the item table. If they can tell a good story about why their particular items should make a particular item, you can increase the probability of them getting tat item.

If they roll a natural 20, they get an item of a higher tier. For example, if the party harvested the gall bladder from an owlbear (a common item worth 50 gp) and roll to turn it into a healing potion with alchemists's supplies, they might get a Keoghtom's Ointment in a natural 20.