It has been over a year since my last set recommendation post, so it is time to update. There have been several good new releases, and several of my previous recommendations have been discontinued. I will start by listing recommended new sets, with the best on top, and then copy my recommendations from last year that are still in the current product lineup.

Note that you can usually get discontinued sets on the secondary market for about the same as their retail price. Sets that are useful for running games rarely turn into the kind of collector items that get expensive. For example, the Forest Ambush set is absolutely perfect for a D&D game, giving you four people, a treasure cart, and a good terrain feature. It originally sold for $12 in 2013, and now you can get it for $8 to $9 plus shipping on Bricklink.

As explained in the Starter Guide, new Lego GMs should start by getting a fantasy minifigures collection and several mixels. This forms the core that you expand from. As you buy more sets, focus on variety. Get new things, not more of the same. RPGs are about exploration and discovery and new interesting things, not huge armies of identical mooks.

It is much better to have one or two sets from a lot of different product lines than to buy a lot from a single product line. You want options, both for character creation and NPCs. However, having said that, I will still recommend several Ninjago sets. They are just that good, the new castle-type sets are not, and Chima and Pirates were discontinued, so there is not much competition. And there is nice variety within the Ninjago sets, giving several different fantasy types. 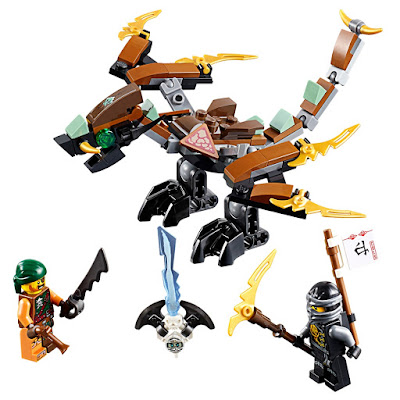 Cole's Dragon: This may be the best Lego fantasy RPG set released in years. $10 gets you two characters, great accessories, and a very nice monster.

Treehouse Adventures and/or Lakeside Lodge: The 3-in-1 Creator location sets just keep getting better. Each one has instructions to be rebuilt into three good adventure locations, and once you have experience building these from the instructions, you should be confident in your ability to make similar things from a pile of loose bricks.

Dojo Showdown: Currently marked down to $20 on the site, it will not be around for long but it is a great deal while it lasts. With four great minifigs, the fun and useful terrain is practically free.


Starlight Inn: This set has two good elf figures, and is packed with good details and useful accessories. The aesthetics are a nice contrast to the savage architecture of the other sets, and can remind your players what could be lost if they fail to defend it properly.


Creature of Stone: The smaller Bionicle things make good giants to fight; this set has two huge creatures for $10.

Raid Zeppelin: This $30 airship packed with awesomeness may be a bit too much magitech for some fantasy games, but Spelljammer or Planescape fans will love it.

Rebel Alliance Battle Pack: $12 gives you four figures that fit just fine in a fantasy world, two humans and two humanoid things. The speeder bike has nice brown pieces that can be turned into dungeon dressing.

Mighty Micros: Hulk Vs. Ultron: Short minifigs are useful. This set gives you a goblin and a little construct, and a variety of nice parts, for $10.

Chaos Catapult: $10 gets you two figures and a lot of good elements. Use that blue armor as a rare magic item; do not let PCs start with it. The catapult is more useful for its pieces than as a catapult, but those are good pieces for making terrain.

City of Stiix: $100 may seem like a lot, but it is well worth it for the right campaign. This set gives you a lot of very nice things you will not find anywhere else, and it can support an entire undead/Ravenloft campaign in style. You will want to use the parts to build lots of little adventure sites before using the instructions to make the big site for the campaign climax.

Creative Building Set: This is a good collection of bricks for building a wider variety of terrain and critters. The terrain builds are a bit small for minifig scale, but they can still give a good sense of place.

Still Recommended
Red Creatures: Every D&D game needs a big red dragon, and you can have a very good one for $15. If your party is not ready to handle a dragon, they can take down a giant snake or a giant scorpion instead. I actually prefer the scorpion to show off the potential of Lego RPG fights: the claws can pick up the characters they have grappled, the characters can hack off legs, claws, and other body parts, and they can can climb on the back of the monster to avoid its claws (or even climb up the tail to chop off the stinger).

Naida's Epic Adventure Ship: This thing has an otherworldly beauty that is fantastic in all senses of the word. If you want the party to interact with fae or elves, and emphasize their distinctiveness, this set and the other Lego Elves sets will do that.

Demolition Starter Set: Any set that gives you four minifigs for $10 is worth looking at, especially if those minifigs have interesting features that give you and your players new options for character creation. You might think that construction equipment is useless for a fantasy game, but you can easily turn it into dwarven mining equipment.

Senate Commando Troopers: Star Wars stuff can often be made to work in a fantasy world. These blue guys look more like greek-fantasy armored hoplites than sci-fi space marines.