The especially fun thing about Lego monsters is that you can chop pieces off them. Lego GMs should encourage this in their games. However, the base D&D rules treat monsters as unified things, where their capabilities are not reduced until they hit zero hit points, and there are no rules for called shots. In order to get the full benefit from Lego monsters, you will have to make a few adjustments to how you run the game. But once you have a bit of practice, handling monster disassembly becomes an easy and fun part of running the game.

Easy Method
If your playgroup is more freeform, casual, and story-focused, you can take the easy way out. Just use the monster stat blocks in the book, allow the players free called shots, and take off a monster body part if the attack did a lot of damage or if someone else already hit it. If they attack a part associated with an attack, the monster loses the attack, and if they got something else, rule as appropriate. The monster falls when it takes damage equal to its hp, as normal. This will speed things along, but it will tend to make battles easier to win than the rules assume.

If you want to use the easy method and keep things a bit more balanced, increase the monster hp by 25% to 50%.

Standard Method
If you prefer more structure and want to keep things at about the same difficulty, here are a few guidelines:

When players attack a large appendage, add +2 to the monster's base AC to hit that part, or give the monster a +2 bonus on its saving throw. When they attack something smaller, like a eye, add a larger bonus, like +5. For called shots with auto-hit spells like Magic Missile, require a check, using the player's spell attack modifier, with a DC equal to the AC of the part being targeted. If the check fails, the spell hits a random body part.

Track damage to different parts separately. This does not add a lot of bookkeeping to the game. Tracking the hp of five body parts is actually easier than tracking the hp of five small enemies, because the body parts do not move around to different parts of the battlefield. If players do not specify what they are attacking, determine the target based on where they are standing, randomly selecting a part that their attack will reach, but letting them hit if they hit the AC in the stat block.

The total hp of all body parts that attack should be about equal to the monster's base hp. A monster with all its attack limbs gone is effectively removed from the battle, and doing this should require the players do deal damage equal to the hp listed in the rules. If the party focuses exclusively on attack limbs, the -2 penalty to their attacks, and the excess damage 'wasted' when they do more than enough to remove a part, should make up for the fact that they are removing attacks before the monster is completely gone. Unless there is a good reason to do so, have the attacks that do the most damage be the ones that are hardest to remove, by giving them more hp.

The total hp of all body parts that move the monster should also be about equal to the monster's base hp, again because a monster with no mobility and no ranged attack is effectively removed from the battle. Each time a leg is removed, reduce its speed based on its original number of legs.

Body parts that would seriously incapacitate the monster if lost, like eyes or armor plating, have hp of about a tenth to a forth of the total hp.

If the monster is gargantuan, taking up more than a 3x3 square on the grid, treat the different body parts as different creatures for the purposes of most game rules. Allow the players to grapple, net, web, and otherwise incapacitate or lock down individual body parts as though they were separate enemies. If you use the flanking rules, also have different parts count as different creatures for flanking, both for the players attacking the monster and the monster attacking the players. Warn them that you are doing this, and that standing right between the claws of something gargantuan will let both claws attack them with advantage.

When the monster takes total damage equal to its listed hp, it collapses in shock.

Advanced Method
If you want an especially tactical battle and are willing to do a bit more work, there is another option. Define the monster core as having about half the listed hp, and have the monster drop if and only if those hp are gone. Give the monster core at least a +5 bonus to AC and saving throws. (This will mean that dropping the monster by attacking the core only will take about as many turns as it would without using called shot methods.)  Reduce the AC and saves by one, two, or possibly even three each time a part is removed, depending on the size of the part.

Allow the players to get around some or all of the core's AC bonus by doing something interesting and/or heroic, like finding a way to get onto the back of the monster, or clinging to its underbelly.

Critical Hits
When using monster disassembly rules and called shots, and not using the easy method, it is a good idea to also change the way you handle critical hits.  It is disappointing for players to call a shot on a small part, roll a critical, and 'waste' all of their damage. This disappointment may make them unhappy with the rules and remove the fun that Lego bricks can offer.

When players roll a critical hit on a called shot to a body part, give them two options:
1) Take the double dice of damage as the rules describe.
2) Let the attack deal normal damage, and take a free attack or other action. This can be any combat action or skill check against any other part they can reach, including making one attack, trying to knock the enemy down or climb on its back, or something more creative ("I take the arm I just ripped off and shove it in the monster's mouth!"). They will roll for success of the extra action as normal.

If the attack scoring a critical hit was a spell attack, and they chose to take the free action, they can attempt to make the spell also affect an adjacent body part by succeeding on another attack roll against the monster's base AC. If the spell does affect both parts, the monster takes double damage, just like a traditional critical, but with the added tactical effect of the called shots.

If you are want to be especially generous, you can simply have them roll double damage, remove the part, and apply all excess damage to the monster or another part. This makes critical hits more powerful, but less interesting, and removes the storytelling potential of the bonus actions. 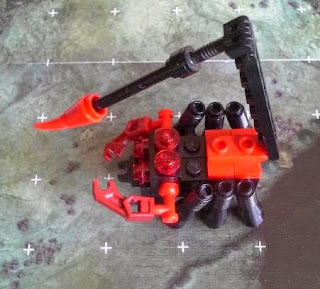 It has 52 hp, AC 15, a speed of 40 ft., and it attacks with two claws and a stinger each round. It is meant to be a standard encounter for a Level 3 party. The Lego figure has a stinger, two claws, four eyes, and six legs that can be removed.

The stinger does a lot of damage, so assign it 26 hp, and give the claws 13 hp each. Hitting any of those requires hitting an AC of 17 (or the scorpion rolling its saving throw with a +2 bonus and failing).

Give each of the legs 9 hp and AC 17. Reduce the monster's speed by 5 feet for each leg removed. Reduce the speed by an additional 10 feet if all the legs on one side are destroyed.

Each of the four eye clusters has AC 20 and 5 hp. Losing both eyes on a side means the scorpion is blinded on that side.

If the players do not call a shot, or announce that they are hitting the most convenient target, have them hit something if they hit an AC 15. Then randomize the target based on where they are.

If using the advanced method, give the core 26 hp, and an AC of 20. Reduce this by one for each part removed (including eyes). Any damage to the eyes in excess of 5 hp carries over into the core.