If you run big battles, and/or you store the minifigs of important NPCs away for later use, you can quickly find that you run out of minifigs. Also, the foot piece for making short minifigs tends to be scarce, and D&D has a lot of small humanoid things like goblins, kobolds, and manes that are often encountered in large numbers. The solution, as usual, is to start building things out of Lego pieces: 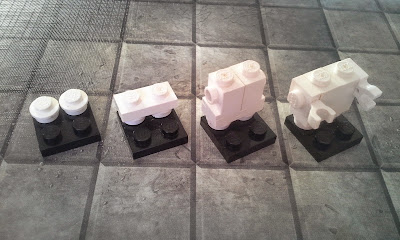 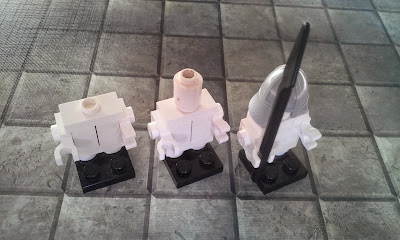 With most Lego collections, it is fairly easy to make large numbers of these things. Note that the brick I used to form the body, with the recessed side peg for the arms, is an older model. Most modern bricks with a peg on the side have a non-recessed peg, and the arm attached to them can swivel up and down like a minifig arm: 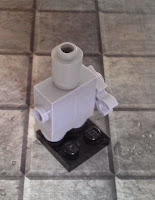 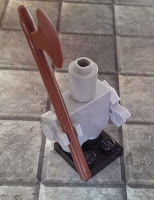 The basic build can be adjusted as needed. These kobolds are made with a tail and a narrow forward-pointed head: 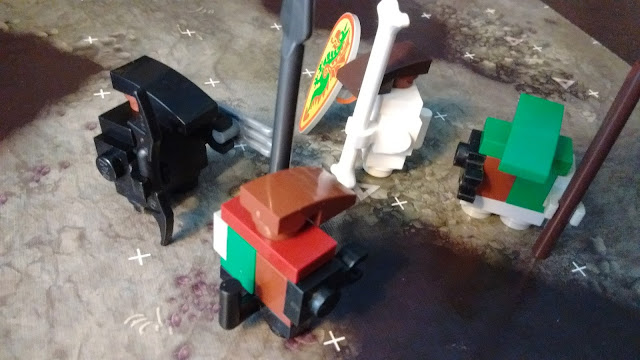 A battle with a lot of mobs is often time-consuming to run, especially if the players bring a horde of allied minions of their own. It can take a long time to move around dozens of enemies and allies, and it is easy to lose track of which one has moved and how many hp they had. The solution is to put a lot of mobs on a larger Lego baseplate, to make a squad: 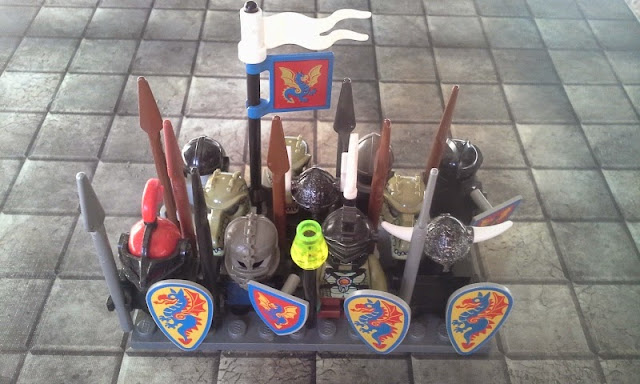 The 12x6 Lego plate fits nicely on eight squares on the dungeon tile. This squad can be moved around the battlefield in a single motion, and all of the people in it remain in the same relative position, making things a lot easier. If a situation comes up where a couple of them need to move a square to be adjacent to an enemy, or where they could surround and flank a single enemy, I assume that they have done so, without breaking up the squad.

The front row person, third from the left, is an actual minifig. This is intentional. This is a squad of allied Bahamut-worshiping kobold warriors and dragonshields, led by an NPC named Sally who has class levels and a magic weapon. All of the other kobolds are faceless minions, but Sally has a Lego face. This serves to differentiate Sally and mark her as the leader and decision maker.

In general, the players know that things they encounter with Lego faces are people that can potentially be talked to. The things without faces are usually not, either because they are mindless or savage, or because someone else is doing the talking and making the decisions for them.