This blog is about running a tabletop RPG using Lego bricks for the miniatures and terrain. I will be posting technique guides, specific building instructions, game reports, and reviews of new Lego sets. Many of the posts will be specific to D&D, because that is the game I am running now, but the general techniques can apply to games in any system or setting.

About Me
I have been a GM for a pastor and his wife, PhD economists, an eagle scout paramedic, philosophers, an accountant, a middle school spanish teacher, and more engineers than I care to count.

I have been playing D&D since Second Edition, have played various White Wolf games, and am familiar with GURPS and several other role-playing systems. For most of these games, I was the GM. The latest version of D&D (called either Next or 5th Edition) is my favorite system for new or casual players because it allows and encourages character flexibility while keeping everyone at a roughly equal power level.

The Case for Lego Minis
If you already have an extensive collection of traditional minis, and know how to paint and customize them, then you should probably keep doing what you are doing. But for everyone else, Lego minifigs have clear advantages over traditional RPG minis:

1) Customizable Characters
Lego minifigs are very flexible. It is easy to mix and match bodies, legs, heads, hats, armor, tools, and weapons to get something that matches almost any character concept. With traditional minis, players often have to use a stock figure that only resembles their character in one or two ways. But with Lego minis, you can easily make a whip-wielding dwarf archaeologist, or a fully armored kobold paladin, or a wizard woodsman with a staff made from a dragon rib: 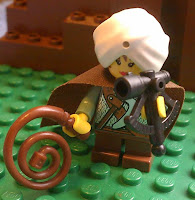 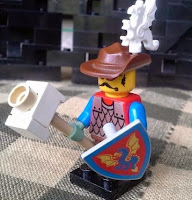 Lego minifigs are also excellent for making good female characters. Traditional minis usually have a very limited selection of women, and they usually have horribly impractical clothing, but with Lego minis, you can put a female head and/or hair on anything: 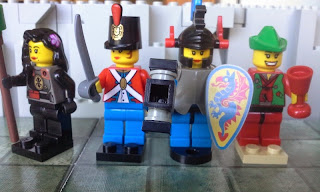 I have a tackle box full of people and accessories that players can use to assemble their mini as they fill out their character sheet. Players tend to love this, and become attached to their character's Lego minifig. It becomes theirs, something that they have shaped and created, in a way that a stock minifig never will.
Beyond character creation, another benefit to Lego minifigs is the way they allow you to change the character over the course of the game. As players gain new equipment and magic items, you can change the mini.

Changing the Lego mini does not have to be limited to the acquisition of powerful magic items. I have had two players that loved to take the hats from defeated enemies. After every fight, their character would be wearing a new hat, the trophy of the latest battle. And some players will swap out melee and ranged weapons on their figure as their character changes weapons in battle.

Just as Lego minifigures give the players the ability to make what they envision, they give the GM the ability to make exactly what the adventure calls for. For example, an important NPC in my campaign is Dr. Sengla, an undead kobold alchemist who possesses the knowledge of the lost Dragonborn empire and wields a magitech flamethrower: 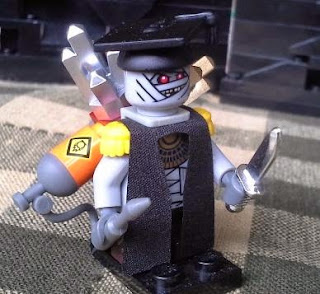 I made her by combining pieces from the Graduate minifig, the Welder minifig, and a mummy from the Adventures sets. 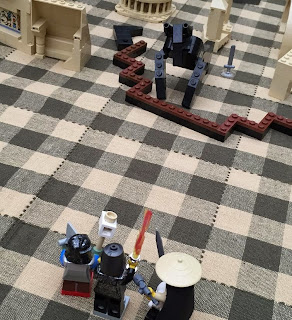 Do your players want to blow a leg off a stone golem, reducing its speed so they can safely kite it? Do they want to attack the straps on the fire giant's armor, making the armor fall off and leaving the giant defenseless and embarrassed? Do they want to chop the claws off a colossal crab, leaving it a harmless beast of burden that can be hitched to a wagon and/or tow their boat? Do they want to disarm the hobgoblin warchief's Flame Tongue Greatsword in the middle of the battle, and start using it against him?

Of course they do! Lego minis can be quickly and easily changed to match the action in the game. Whittling away the hit points of a big enemy that never changes until it falls over dead can be kind of boring, but it is much more satisfying to gradually reduce horrible monsters to piles of disconnected Lego pieces.

In RPGs as in many other things, Lego bricks encourage creative thinking. Seeing monsters and terrain made of many pieces that can be disassembled and reassembled encourages the kind of creative thinking and clever stunts that leads to great stories.

4) Cost
Individual Lego minifigures cost about as much as traditional prepainted RPG minis, and large Lego monsters are significantly cheaper than large RPG mini-scale monsters. When you take into account the flexibility of Lego minis, the cost of running a campaign with proper miniatures for each encounter is much lower.

First, there is a good chance that you or someone in your playgroup already has a Lego collection. Much of this blog is written for people already have a big pile of Lego bricks from their childhood, and are currently playing an RPG. Instead of buying new things for your game, you can just use what you already have.

Even if you have to buy the Lego minis new, and even if you do not take advantage of all their capabilities, you will pay less for an equivalent play experience. Buying Lego Minifigs at $4 each is probably the least cost-efficient way of building up a collection of Lego people. You can almost always do better with bigger sets, as I explain in the Lego GM Starter Guide. But even at that price, they compare well to random pre-painted RPG figures. The typical price of a booster pack of D&D miniatures is about $12, for four figures, or $3 each.

The case for Lego terrain

Fun adventures tend to involve things like smashing through walls, dropping rocks on enemies, chopping down trees to use as bridges, and so on. Lego bricks allow and encourage this. Players love to gain tactical advantage by rearranging the terrain; this kind of freeform play is a thing they can do in tabletop RPGs that they still cannot do in computer games.

It is perfectly fine to use Lego minis and monsters on standard dungeon tiles, battlemats, or grid paper you draw on, and use the 'theater of the mind' approach to terrain. But if you have a Lego collection, you can also use it to make any kind of terrain that the party might encounter. This does not take nearly as much time or money as you might think. The key is to make little terrain segments, natural features, and dungeon dressing, and scatter them on a grid map. There are a lot of cheap Lego sets available that make very nice terrain features, and I will be posting build guides for quickly making lots of useful and flexible terrain pieces.

The blog will update randomly and infrequently. I already posted most of what I wanted to say. If you have any requests for a new post or topic, please comment here or on the Facebook group.